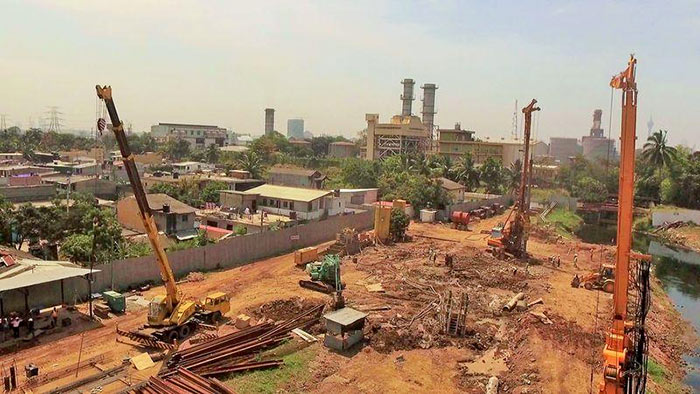 When heavy rain falls in the hills and plains west of Colombo – and in the city itself at the same time – Sri Lanka’s capital drowns.

As runoff from the west rushes into the Kelani River, which empties into the sea just north of Colombo, water begins to spill into the network of canals that cross the city.

Gates, built to stop that flow, can hold back the tide – but also mean any rain falling in Colombo itself cannot escape to the river.

“When we close those, there is no outlet for the rainwater that is gathering in Colombo,” said Mohamed Moufar, a deputy project manager for the Metro Colombo Urban Development Project.

Those living in low-lying areas near the Kelani River know the risks well.

“We know that if the gates are closed, then its trouble for us. Every time that has happened in the last few years, all this area has gone under water,” said Jayatissa Somasiri, a resident of the Peliyagoda area, on the banks of the river.

But a solution is now in the works in Colombo to a problem many cities around the world are facing as climate change brings more extreme rainfall and higher flooding risks.

In January, work began on a large pumping station designed to extract water from flood-prone parts of Colombo even if canal gates are closed.

The station, on the south bank of the Kelani River, close to where Somasiri lives, will suck up rainwater that falls inside the city and pump it out to the river, on the other side of the closed floodgates.

The $12 million station is expected to be completed by mid-2019, along with another similar pump further upriver.

There are also plans to construct a third pumping station that would pour excess water into Beira Lake, a 160-acre body of water that sits in the heart of Colombo, and that has its own outlet to the sea.

Studies since the 1990s have urged that such pumping stations be built, Moufar said. But the decision to push ahead with the project now has come because of much more frequent flooding, he said.

Over the last decade, Colombo has seen an uptick in floods. In 2016 and 2017, large areas of the capital were inundated as the South Western Monsoon began in late May. 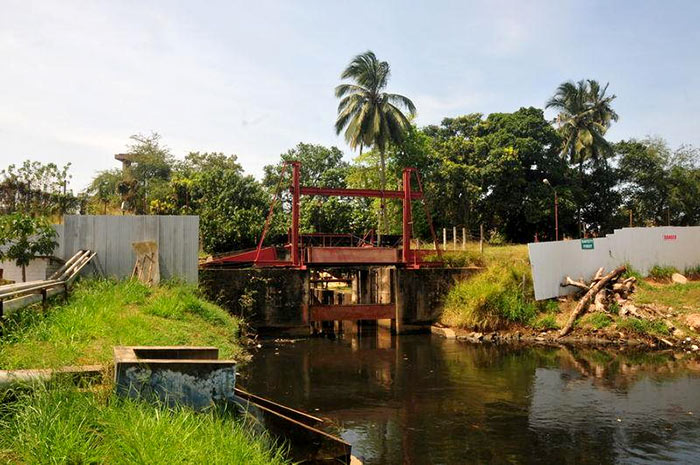 The pumping stations are part of the larger $320m project aimed at setting up an effective flood protection plan for the city, as well as improving roads and solid waste disposal, under the Ministry of Megapolis and Western Development.

Moufar said his agency is confident that constructing three pumping stations, two tunnels to carry rainwater and a major diversion canal, also to take floodwaters out to sea, will help the city confront its worsening flooding risks.

But keeping Colombo’s existing network of canals clear is also crucial to limiting flood threats, he said. Decades of unauthorized construction on the riverbanks, as well as dumping of waste and general neglect have limited the canals’ ability to hold and carry water, officials say.

“There are 44km of canals in Colombo. (If) we keep the canals clean and clear, we can get the water out,” he said.

Climate experts warn that cities like Colombo – which faces changes to its annual monsoon and more extreme rainfall associated with climate change – need to adapt to changing rainfall patterns.

“The problem is not the lack of rain, but the intensity and intervals of rain. We are now getting large amounts of rain in very short bursts,” said S.M. Premalal, the director general of the country’s Meterological Department.

For example, in May 2016, some parts of the island’s western plains received over 300mm (almost 12 inches) of rain within two days.

“It is now vital that we gear our water management systems to meet this change,” Premalal said.

Moufar said more frequent floods have made Colombo’s people and its officials more aware of the growing risks – something that has helped build support for making the needed changes.
“There is more urgency now, because everyone is nervous when the monsoon arrives in late May. We have seen what it can do to the city,” he said.

Somasiri said he’s not very familiar with the risks from climate change, or unsure whether the huge construction work underway near his house might help solve flooding problems.

But he can see that the rains are stronger – and says something needs to be done.

“It has become a pest now. When it rains, the entire city becomes a pond. Someone needs to fix that,” he said.