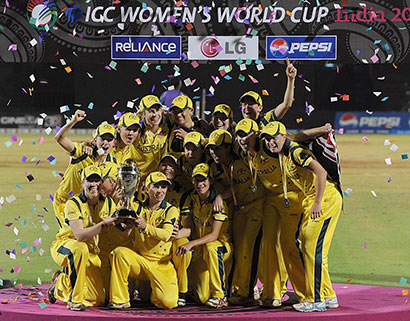 The champion team posted the biggest winning margin in the history of women’s World Cup finals, snatching a 114 run victory after dismissing the finals debutantes for 145 runs in 43 overs.

“To be sitting here is an unbelievable feeling and to have done it in the same year we won the Twenty20 Cup I think it’s really special,” captain Jodie Fields said after the game.

“It’s a great piece of history for Australian women’s cricket and we’re very proud of that.”

Australia were already firm favourites in the lead-up to the ODI decider at Mumbai’s historic Brabourne Stadium yesterday, but improved their odds immeasurably by winning the toss and electing to bat first on the hard, flat pitch.

‘Bat first and bat big’ is how all three previous day-night matches were won in this World Cup tournament in India and so it proved after the Aussies set their Caribbean rivals a 260-run chase.

Australian openers Meg Lanning and Rachael Haynes kept a cracking pace, clocking a partnership of 52 until Lanning was caught for 31 from a delivery from West Indies star all-rounder Stafanie Taylor in the last ball of the tenth over.

Lanning’s exit took some wind from the Aussie’s sails with Jess Cameron and Rachael Haynes adding just 36 more runs by the end of the 20th over before Haynes was dismissed for 52 after lobbing a slow ball straight into the hands of Kyshona Knight at mid-wicket.

Alex Blackwell fell cheaply for 3 soon after, though Jess Cameron added 19 to the scoreboard in just one spectacular over with two sixes and a four off West Indies seamer Tremayne Smart, to bring the Australian total to 3/146 .

She was eventually undone for 75 after smashing a full toss delivery from Daley _ again straight into the safe hands of Kyshona Knight on the deep midwicket boundary _ though earned player of the match for her swashbuckling performance off 76 balls.

The Windies pocketed two quick and valuable wickets with Lisa Sthalekar caught out for 12 and Sarah Coyte for 7, but Perry and Captain Jodie Fields kept the runs ticking over to see the Aussies to a 7/259 total.

Much was expected of the West Indies batters but openers Natasha McLean and Kycia Knight were no match for pace bowler Ellyse Perry, who had spectators and Twitter fans swooning with a magnificent 3-2 in three overs, dismissing Knight for 17 before catching Stafanie Taylor nine balls later for just 5.

It was a priceless wicket for the Australians, made all the sweeter for an earlier Not Out decision against Perry when Lanning appeared to catch Taylor low at first slip.

The statuesque 22-year-old was on fire, soldiering on despite a nagging ankle injury that forced her out of the previous two games and threatened to sideline her again last night after she failed to complete two run-ups in her first over.

It was a tense moment for the Australian team and one Captain Jodie Fields conceded later caused her to momentarily doubt her decision to drop promising 17-year-old fast bowler Holly Ferling from the finals side in favour of Perry.

But the star Sydneysider pushed through, dispatching McLean for 13, and leaving the Windies at 3/41 at drinks.

It took the earlier-than-expected appearance of star slugger Deandra Dottin, pushed up the order into fifth after Kyshona Knight retired hurt, to bring a brief spark to the chasers’ game.

The right hander from Barbados, who holds the record for the fastest hundred and fastest fifty in T20 internationals – the former across the men’s and women’s games, came out smashing.

Both Dottin and skipper Merissa Aguilleira hit several massive sixes and boundaries before Aguilleira fell to an off-spin delivery from Sthalekar.

But it was Sthalekar’s clean bowl of Dottin for just 22 that sealed the fate of the West Indies, who were trailing badly by the 30th over and never looked like they could recover from the loss.

“I guess we believed we could attack the other bowlers with Deandra coming in and with a run rate of 7-8 an over we could still get there. That was our plan but it didn’t really work out,” she said after the game.

But the 27-year-old Trinidad hairdresser refused to be disappointed in her team’s second place result.

“We’re pleased as a team. Yes we did not execute as we could have but we have so much to be thankful for. Second place is extremely wonderful and I believe the people of the Caribbean would be very pleased with us.

“From fifth place to second place is a huge accomplishment. We have never reached the World Cup final before and we are here.”