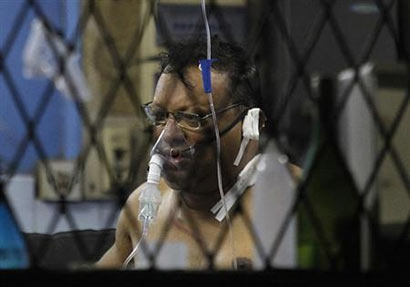 Three unidentified gunmen entered a guest house where Faraz Shaukatally, who works at the Sunday Leader, was staying, broke into his room and opened fire, police said.

The journalist was on the telephone discussing a story to appear in this week’s edition when he was shot, Sunday Leader Editor Sakunthala Perera said. The attack occurred on Friday, the paper said in its online edition.

U.N. High Commissioner for Human Rights Navi Pillay said she was deeply disturbed at the “attempted assassination” of a journalist working on a paper critical of the government. Britain also expressed serious concern at the shooting of the journalist, who holds joint British citizenship.

Political violence has eased since Sri Lanka’s army crushed a three-decade Tamil separatist rebellion in May 2009, but international human rights groups say rule of law problems persist, including abductions and attacks on media and government critics.

Doctors at the Colombo National Hospital said Shaukatally, 52, was undergoing further tests before being admitted for surgery.

“The government’s failure to prosecute those who have been responsible for attacks on media in the past has paved the way for this nature of incidents to continue,” Sunil Jayasekera, secretary of the Free Media Movement, a Sri Lankan rights group, told Reuters.

An editor of the Sunday Leader was killed in January 2009 and other staff journalists have also been attacked, but no arrests have been made.

Pillay, who called on Sri Lankan authorities this week to allow international experts to help resolve issues of alleged wartime crimes, said she would report her concern about extra-judicial killings, abductions and the suppression of freedom of expression to the Human Rights Council.

“I’m deeply disturbed by this particular shooting because it’s a journalist and he’s attached to a newspaper which is known to be critical of the government, particularly on accountability and injustice issues,” she told Britain’s Channel 4 News.

She called for a thorough investigation and protection for Shaukatally. “It’s an act of attempted assassination so he needs to be protected immediately,” she said.

Britain also said it was shocked by the shooting.

“The Sri Lankan authorities must quickly identify who committed this crime and bring them to justice,” Foreign Office Minister Alistair Burt said.

“There has been a range of attacks in Sri Lanka on journalists, civil society organizations and others in recent years. To date, too many incidents have had little investigation and no resolution.”

Sri Lanka’s rights record has been subject to criticism over alleged excesses during the military’s final phase in defeating Tamil Tiger separatists in May 2009. Rights groups say the military killed thousands of minority ethnic Tamil civilians in the final weeks of the conflict.

A report presented by a court of inquiry on Friday said the army did not shell civilians at the close of operations and blamed Tamil Tiger rebels for the deaths.