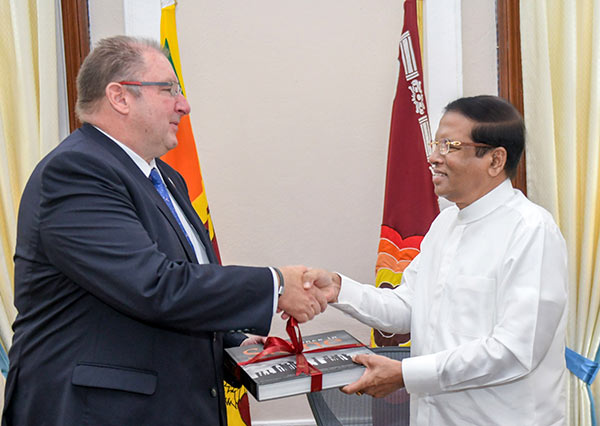 World Bank Vice President for South Asia Region, Hartwig Schafer said that the World Bank will increase assistance to Sri Lanka under three of its new operations. They include assisting the agriculture sector faced with climatic vagaries, irrigation, renewable energy, climate resilience operations and renovation of tanks in rural areas.

Mr Schafer said this when he called on President Maithripala Sirisena at the President’s Office on Thursday (July 18). Referring to the Easter Sunday terror attack and its impact on economy, he said that the World Bank would provide monetary assistance to reduce budget gap so that Sri Lanka could continue global borrowings with a sound economic footing.

President Sirisena expressed his gratitude to the World Bank for long standing financial support to Sri Lanka. He made a special mention about the World Bank’s support extended to Sri Lanka in the aftermath of the challenges faced due to April 21 terrorist attack.

Expressing gladness over the quick recovery made by Sri Lanka after the terrorist attack, WB Vice President said that the global community stands by Sri Lanka at this moment of need.

Mr Schafer, who is in Colombo to chair the World Bank Senior Regional Managers Meeting, said that the Bank decided to hold its annual session in Colombo to show solidarity with Sri Lanka as the country is trying to restore normalcy after the terrible terrorist attack on Easter Sunday.

He congratulated Sri Lanka for rising to the level of Upper Middle Income Country and said it’s a testimony of country’s resilience.