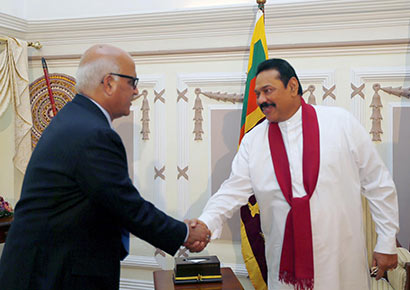 In a meeting with the World Bank’s Executive Director for Sri Lanka, India, Bangladesh and Bhutan Mr. Mukesh Prasad yesterday (July 15), President Mahinda Rajapaksa urged the Bank to focus more on large core projects rather than smaller projects that have a lesser impact.

Mr. Prasad agreed and said that the World Bank too has begun to focus more on larger “transformational projects that have a direct bearing on the goals of the country.”

An example of a successful Bank-funded project is the work done on urban development in Colombo, which has helped lessen the flooding that the city used to experience, the President said. President Rajapaksa also requested Mr. Prasad’s assistance in accelerating the project approval process, noting that it currently takes a very long time for the project documentation to be processed, which causes further delays to the project’s implementation.

While noting that current Bank-funded projects are progressing well, Mr. Prasad said, “It should be possible to do more.”

Also present at the meeting were Secretary to the Treasury Dr. P.B. Jayasundera and President’s Chief-of-Staff Mr. Gamini Senarath.