Yupun Abeykoon to compete in the 100m semi-final today 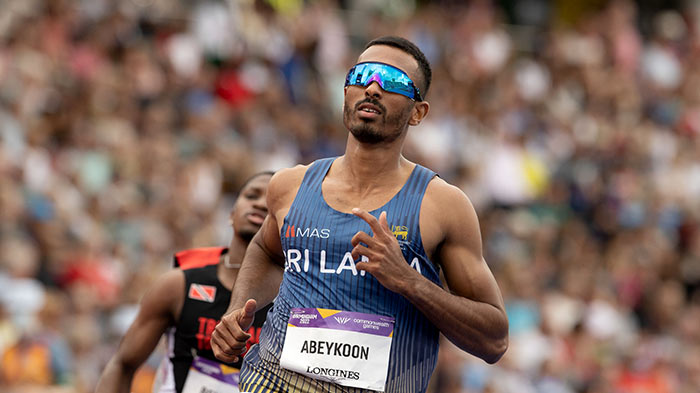 Yupun Abeykoon of Sri Lanka runs in the men’s 100m heats during the athletics on day five of the Birmingham 2022 Commonwealth Games at Alexander Stadium on August 02, 2022 on the Birmingham, United Kingdom. (Photo by Steve Christo – Corbis / Corbis via Getty Images)

The fastest athlete in the South Asian region returned a superb time of 10.06s and qualified to compete in today’s semi-finals, scheduled for 11.40 p.m. Sri Lanka time with the fastest time in the Heats.

Third placed Godson Oke Oghenebrume (10.36s) of Nigeria and second placed Kion Benjamin (10.34s) of the Trinidad and Tobago were the real threats for Abeykoon in this heat, but he managed to storm past them to secure the top spot.

The top two athletes of each heat (10 heats) progressed to the semi-finals while the next seven semi-final spots were awarded to the fastest losers.

Abeykoon said that now that he had cleared his initial hurdle, he would target a medal when he competes in the finals today (August 03).

“I am happy to reach the semi-finals and my next goal is to reach the final and win a medal for Sri Lanka,” Abeykoon revealed soon after the event.

Meanwhile, the other Sri Lankan athlete to take part yesterday, Gayanthika Abeyratne clocked a Personal Best time of 2:01.20 secs in the Heats of the Women’s 800m but it was not enough to take her to the next round.

Home » Yupun Abeykoon to compete in the 100m semi-final today