‘No surrendering LTTE cadres were killed’ 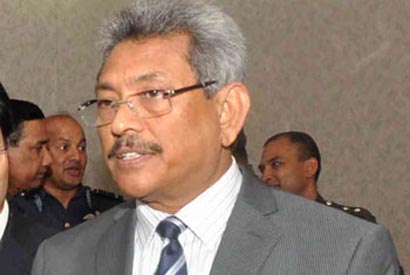 LTTE cadres were not killed when they surrendered to the army during the war, says Defence Secretary Gotabhaya Rajapaksa. “Why should the government, which directly looked after the family of LTTE leaders, kill those who surrendered to the military?” he questioned.

He made these statements during a function today (August 01) presenting the Defence Ministry report on ‘Humanitarian Mission Factual Analysis’ to foreign missions in Sri Lanka.

Addressing the gathering at the event being held at the Hilton Colombo he revealed that 11,000 former LTTE cadres have been rehabilitated and reintegrated to society thus far.

On the topic of Channel-4 reporters inquiring from Maj. Gen. Shavendra Silva, whether Gotabhaya Rajapaksa had given orders to kill surrendering Tamil Tiger cadres, he expressed “this was absolutely false.”

“The sole purpose of these allegations is to discredit Sri Lanka and disrupt the prevailing peace in the country.”

Medical supplies were released to the North even up to the last day of the humanitarian mission, which ended on May 18, 2009, he further stressed.

12 Responses to ‘No surrendering LTTE cadres were killed’