133 killed, over 125 injured in twin election-related blasts in Pakistan 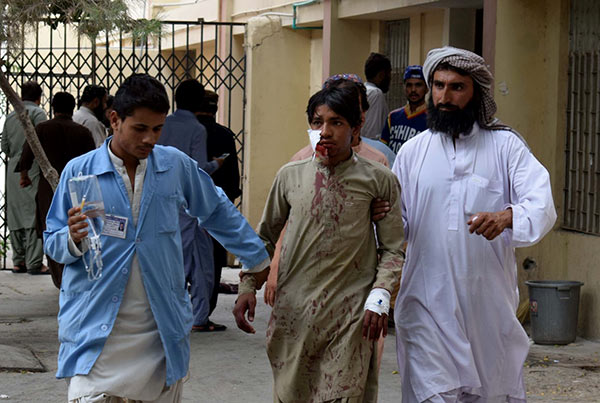 At least 133 people, including a top nationalist leader, were killed and more than 125 others injured today in a powerful suicide blast and a targeted attack on separate election rallies in Pakistan, the deadliest in a series of assaults on candidates ahead of the July 25 polls.

Raisani is the brother of former Chief Minister of Balochistan Nawab Aslam Raisani.

The outfit announced the claim through its Aamaq news agency without providing further details.

At least 128 people, including Raisani, were killed and more than 125 injured in a deadly blast, police officials said.

“Initially the death toll was not high but many critically injured persons including Siraj Raisani passed away in hospitals,” Balochistan’s caretaker health minister Faiz Kakar said.

He said the death toll could rise further as 120 people have been wounded in the explosion.

Officials of the Bomb Disposal Squad (BDS) confirmed that it was a suicide blast. They said that around 16-20 kilogram of explosives were used in the attack.

Following the incident, an emergency was declared in Quetta hospitals, with additional medical staff summoned.

The attack came hours after a bomb hit a rally of Akram Khan Durrani of Mutahida Majlis Amal (MMA), an alliance of religious party, including Jamiat Ulema-e-Islam-Fazal (JUI-F) and Jamaat-e-Islami, in Bannu area of Khyber-Pakhtunkhwa province.

Five persons were killed and over 37 other injured, police said.

Durrani was unhurt in the attack. He later visited the injured in a hospital in Bannu and said that his vehicle was damaged in the attack.

Durrani, who is contesting in July 25 elections against Pakistan Tehreek-e-Insaaf chief Imran Khan, announced that he will continue campaign despite threats.

No group has claimed responsibility for the two attacks so far.

The twin attacks came as former prime minister Nawaz Sharif along with his daughter Maryam returned to the country to face arrest in a corruption case.

The law and order had suddenly deteriorated ahead of elections despite claims by the government and security forces that terrorism has been wiped out of the country.

On Monday, a suicide bomber killed Awami National Party (ANP) leader and candidate in the general elections, Haroon Bilour and 19 others after striking at a corner election meeting in Peshawar city.

The Pakistan Tehreek-e-Taliban claimed responsibility for the attack on the ANP rally.

On July 7, seven people were injured when a convoy of a Muttahida Majlis-i-Amal came under attack in Bannu.

Home » 133 killed, over 125 injured in twin election-related blasts in Pakistan