20A will follow a complete democratic process – Dayani Mendis 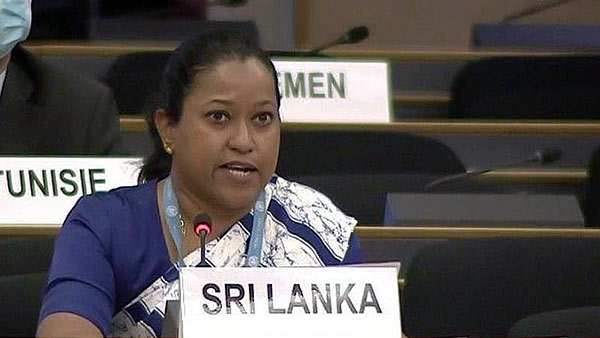 The draft 20th Amendment to the Constitution submitted through Parliament will be discussed, debated, following a complete democratic process, where all stakeholders will have the opportunity to present their views, the Sri Lankan Mission in Geneva told the 45th Session of the Human Rights Council (HRC).

Delivering the country’s Statement on Tuesday, acting Permanent Representative of Sri Lanka to the United Nations in Geneva Dayani Mendis told the Council that the Government of Sri Lanka is of the view that High Commissioner’s comments on the proposed 20th Amendment are unwarranted and pre-judgmental, based on presumption.

Excerpts of the statement are given below. “Sri Lanka wishes to respond to the references made by the High Commissioner for Human Rights to Sri Lanka in the ‘Global Human Rights Update’ on September 14. As this Council is aware, since February/March this year, the entire world was challenged by the COVID-19 pandemic, a health crisis of a global scale, which had impacted many aspects of governance in many countries, and Sri Lanka was no exception. We hope that this Council would appreciate that Sri Lanka while successfully containing the spread of COVID-19 through a balanced, multi-sectoral approach and despite this challenge, held its commitment to the democratic processes, and conducted Parliamentary elections successfully and peacefully, last month, which the EU has acknowledged.

“Sri Lanka made it clear even as it withdrew from the co-sponsorship of Resolution 30/1, that it will remain committed to achieve reconciliation, accountability and human rights within the framework of the Sri Lankan Constitution, through a domestically designed and executed process in line with the Government’s policy framework. Sri Lanka would like to state further that the new Government which assumed office with the election of the new Parliament on 5 August remains committed to the assurances given before this Council in February this year.

“The GoSL wishes to state that the pardon to the former Army sergeant was granted in terms of the powers and provisions of the Constitution of Sri Lanka.

“The Government rejects the references made to false and unsubstantiated allegations leveled against senior military officials being appointed to key positions of institutions. Sri Lanka has consistently refuted the credibility of these allegations and wishes to highlight that the domestic processes such as the LLRC and Paranagama Commissions that examined these allegations particularly with regard to the last stages of the conflict, have not found substantive evidence against any of the senior military officials referred to in this regard.

“In the absence of any substantive proof, Sri Lanka considers that the continued arbitrary accusations on crimes or crimes against humanity made against these senior military officials are unacceptable and a violation of the principles of natural justice.

“In conclusion, with regard to allegations of surveillance and intimidation, the Government has already publicly refuted these allegations, and is committed to protecting and promoting freedom of expression and civil society space, and ensuring that complaints received on alleged attacks against journalists, human rights defenders and civil society are investigated and prosecuted.

The prime focus of this Government is to ensure national security, and to uphold the rule of law and order in the country for all its citizens, with the aim of creating ‘an environment where any citizen can live freely without any fear for the safety of themselves and their families’.

In line with the above policy framework, the Government is committed to achieve the Sustainable Development Goals of the UN, with a determination to uplift the lives of all its citizens and ensure that there is no threat to peace, reconciliation or development in Sri Lanka.”

Home » 20A will follow a complete democratic process – Dayani Mendis