48% of the NPP candidates are graduates – Bimal 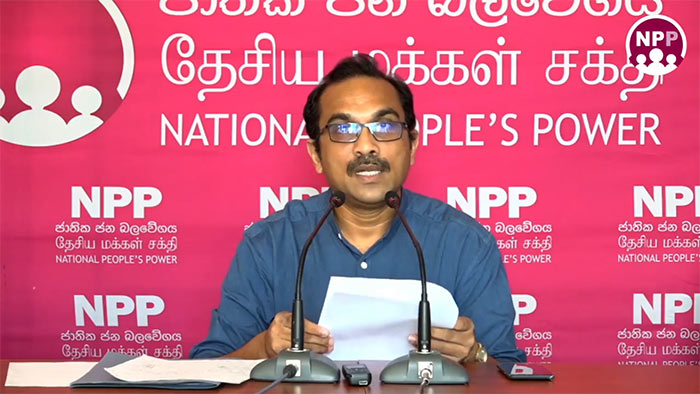 The National People’s Power says none of its candidates have any corruption charges or incidents of abuse of power against them.

Speaking at a media briefing today former JVP Parliamentarian and member of the NPP Bimal Ratnayake said 48% of candidates contesting the 2020 General Election are graduates.

He said 15 former Parliamentarians are on the nomination lists from the National Movement for People’s Power including Anura Kumara Dissanayake, claiming they are former MPs who haven’t faced a single corruption charge during the past 20 years and have not misused the country’s law.

Ratnayake said over 50 leaders of trade unions in national and provincial level have also been included in the NPP lists, while claiming that over 60% of those in the list are professionals and a large number of activists are also contesting.

He noted that 29 individuals are on the National List of the National People’s Power, with 11 of them lecturers.

He added that Parliament requires MPs who will formulate laws, manage funds and properly study and address the people’s concerns from the people’s side, despite which faction establishes a government.

Commenting on the recent statement by Karuna Amman that he killed 2,000-3,000 soldiers in Elephant Pas during the conflict, Ratnayake said at the time of the conflict they were unable to identify perpetrators.

The Former MP noted that now with Karuna Amman having accepted responsibility for the deaths, legal action must be taken.

Bimal Ratnayake noted that recording a statement at the Criminal Investigation’s Department alone would not suffice.

He said the United Nations and other affiliated organizations have also called for a prompt investigation into the claims.

1 Response to 48% of the NPP candidates are graduates – Bimal

Home » 48% of the NPP candidates are graduates – Bimal