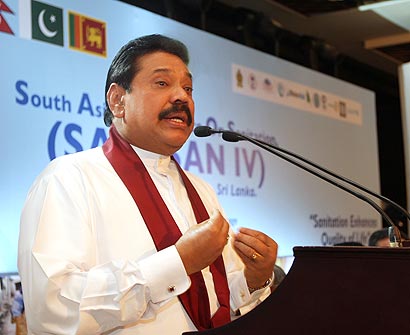 Fourth South Asia Conference on Sanitation (SACOSAN – IV) kicked off at the Cinnamon Grand Hotel in the Sri Lankan capital, Colombo on Wednesday 06 April to raise awareness about the sanitation crisis in the region. President Mahinda Rajapaksa inaugurated the four days Ministerial Summit which included attendees from Afghanistan, Bangladesh, Bhutan, India, the Maldives, Nepal, Pakistan and Sri Lanka.   The Conference will focus on ways to improve water and sanitation in the region and influence policy decisions on the topic.

Addressing the summit President Rajapaksa said that the government of Sri Lanka is committed to achieve the millennium development goals of minimizing poverty on a national level by 2015 and providing better housing, education, sanitation facilities and conservation of water by 2020. He also pointed out it is much useful for the developed nations to spend their defense expenditure for eradication of poverty and other hardships being faced by the developing nations for a meaningful development.

According to a recent report, Mustafa Talpur, the regional advocacy and policy adviser for Water Aid said Bangladesh, Bhutan, India, Maldives, Nepal, and Pakistan pledged their commitment to achieving the United Nations Millennium Development Goal target related to water and sanitation during the first South Asian Conference on Sanitation and the majority is falling short of their targets.  However Sri Lanka and the Maldives are on track to reach the water and sanitation.

Ramisetti Murali of Freshwater Action Network South Asia (FANSA) spoke of health impacts of poor water and sanitation and said that around one billion (64 percent) people of the total population in South Asia lack access to proper sanitation, and more than 2.8 million children under the age of five face severe health risks. According to the official data revealed that around 750,000 children have so far reportedly died due to the diarrhea since last SACOSAN.

The South Asian Conference on Sanitation (SACOSAN), a government led biennial convention held on a rotational basis in each country, is a platform for dialogue and influence created by the governments of South Asian Countries to review the progress made in the area of Sanitation. The SACOSAN process would help to generate political will to narrow the gap in Sanitation access and usage. The Conference is intended to develop a Regional Agenda on Sanitation, enabling the learning from experiences and setting forth action for the future. The objectives of such conferences are to accelerate the progress of sanitation and hygiene in South Asia and to enhance quality of life of the people.

The Minister of Water Supply and Drainage Dinesh Gunawardene, Ministers responsible for sanitation in South Asia, Ambassadors, Members of the Government and Non Governmental Organizations and students participated in this event.