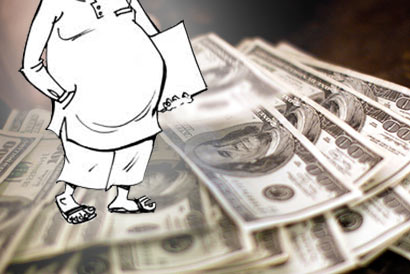 Ninety-two Sri Lankan citizens hold a total of $58.3 million in 129 Swiss bank accounts, according to data released by the International Consortium of Investigative Journalists (ICIJ) and leaked by an HSBC whistleblower.

The maximum amount of money associated with a client connected to Sri Lanka was $10.7 million while the island nation is ranked #112 among the countries with the largest dollar amounts in the leaked Swiss files.

According to Swiss Leaks, 88 client accounts were opened between 1974 and 2006 and linked to 129 bank accounts. Of the 92 total clients 18% have a Sri Lankan passport or nationality.

ICIJ notes that each client could be linked to more than one country and that there are more than 19,000 clients not associated with any country.

It’s not illegal to have accounts in Switzerland, which is known for its banking secrecy, but it raises questions about the transparency of public funds, particularly at a time when Sri Lanka is probing massive frauds and corruption during the previous regime and attempting to locate hidden wealth.

“There are legitimate uses for Swiss bank accounts and trusts. We do not intend to suggest or imply that any persons, companies or other entities included in the ICIJ Swiss Leaks interactive application have broken the law or otherwise acted improperly,” the group said.

The Swiss Leaks project is based on a trove of almost 60,000 leaked files that provide details on over 100,000 HSBC clients and their bank accounts.

The files at the foundation of the Swiss Leaks articles and the interactive application are based on data secreted away by Hervé Falciani, a former HSBC employee-turned-whistleblower. He turned the data over to the French government in 2008 and its tax authority launched an investigation.

The French newspaper Le Monde obtained a version of the tax authority data, which covers accounts of more than 100,000 clients (individuals and legal entities) from more than 200 countries. The newspaper shared it with ICIJ with the agreement that it would assemble a global team of journalists to explore the data and produce this reporting project.

The data comes from three types of internal bank files from different time periods. One reflects clients and their associated private accounts at the Swiss branch of the bank mostly from 1988 to 2007.

Another is a snapshot of the maximum amounts in the client accounts during 2006 and 2007. The third is of notes on clients and conversations with them made by bank employees during 2005.

The files show the accounts to hold more than $100 billion in total, from $12.6 billion held in the name of governmental institutions from the oil rich nation of Venezuela under the late former leader Hugh Chávez, to amounts recorded as zero. The confidential files also provide a wealth of other detail, such as secretive offshore companies linked to some accounts.

The Swiss government on its part said these names are from “stolen data” — an assertion that might make it difficult for countries to get details on these accounts without any additional evidence.

Switzerland, however, said the country is “strongly committed” to fight against the black money menace following change in its policy a few years ago.

“The published information is based on the known list with stolen data of the years 2007 and earlier,” a Switzerland government spokesperson said from Berne.

Amid this global expose revealing tax dodging through accounts in its Swiss bank, British major HSBC on its part has admitted to past lapses even as it claimed that rigorous control are now in place to curb illicit fund flows. Asserting that it has taken significant steps over the past years, HSBC said its Swiss private bank has witnessed almost 70 per cent decline in its client base since 2007.

Details of more than 1,00,000 account holders around the world, including over 1,000 from India, have been revealed through a joint investigation by the International Consortium of Investigative Journalists (ICIJ).

“We acknowledge that the compliance culture and standards of due diligence in HSBC’s Swiss private bank, as well as the industry in general, were significantly lower than they are today,” HSBC said in an email statement.

Switzerland, long known as a place with unbreakable banking secrecy, has come under intense global pressure to crack down on illicit fund flows.

2 Responses to $58.3 Million held in Swiss accounts by 92 Sri Lankans