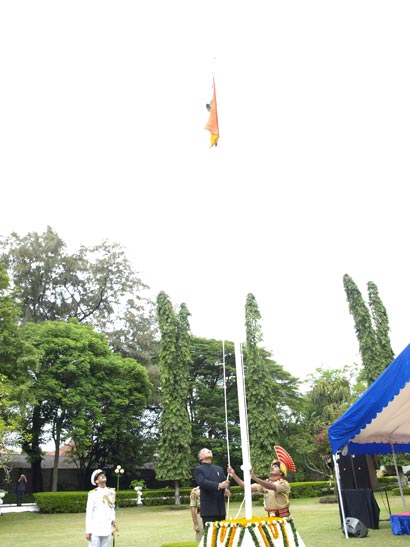 On the occasion, High Commissioner also conveyed his greetings to the citizens of Sri Lanka and noted that India and Sri Lanka, knit together by the ties of history, geography and culture, were destined to play key roles in the rising Asia and our partnership must therefore progress in the spirit of being the closest of neighbours and friends whose destinies were interlinked.  High Commissioner highlighted the exchange of high level visits in the recent past and emphasized the successful implementation of engagement of bilateral agenda in all fields.  Last year, India was Sri Lanka’s largest trading partner and also emerged as the number one source country in terms of foreign tourist arrivals and Foreign Direct Investment. High Commissioner also highlighted that earlier this month, negotiations were completed on agreements to set up a 500 MW power project at Sampoor in Trincomalee District by National Thermal Power Corporation (NTPC) and all the agreements have been initialed and will be signed shortly. High Commissioner also expressed happiness at the resumption of ferry service between India and Sri Lanka after about 30 years with the commencement of ferry service between Tuticorin and Colombo in June this year.

High Commissioner also highlighted the progress in the construction of 50,000 houses under a grant provided by India and also the work in progress for the wreck-removal and salvage at the Kankesanthuraya Harbour which will help in restoring traditional commercial linkages.  High Commissioner also highlighted the rapid progress in reconstruction of railway lines in Northern Sri Lanka, under a Government of India Line of Credit of US $800 million and another railway project in Southern part under another concessional credit line of US$ 167.4 million.  He also highlighted that construction of a 150-bed multi-specialty hospital at Dickoya in the Central Province under a grant from the Government of India has started and that all the projects funded by the Government of India are being implemented in a smooth and timely manner.

A brief cultural programme followed which included patriotic songs and colourful and patriotic dance performances by the students of the Indian Cultural Centre. Subsequently, High Commissioner and other officials of the High Commission paid their respects to the memory of fallen soldiers of the Indian Peace Keeping Force (IPKF) in a solemn ceremony at the IPKF Memorial in Colombo.

The following is the full text of the speech made by Ashok K Kantha, High Commissioner of India
On the occasion of the 65th Independence Day of India, I extend my greetings and good wishes to my fellow citizens of India and to the people and the Government of the Democratic Socialist Republic of Sri Lanka.

Today, as India celebrates its 65th Independence Day, we celebrate our nation’s continuing commitment to democracy, pluralism and diversity of religion, language, race, ethnicity and culture. This diversity, we feel, is the key to our unity. Today, India’s message to the world is that of pluralism, tolerance and balance between individual rights and collective responsibilities. Internationally, there is now widespread respect for India’s role as a force of moderation, reason and stability and for her values and ideals rooted in peaceful coexistence, multilateralism, justice, freedom, equality and fraternity.

India, which emerged relatively unscathed from the global economic crisis, has been growing at an average of over 6% per annum, over the past twenty-five years. Real GDP growth rate averaged 7.3% in the last decade, catapulting the Indian economy to the status of the second fastest growing large economy in the world. In the fiscal year 2011-12, we are fairly confident that our economy will maintain a growth rate of around 8%. This growth is vital to fund our ambitious programmes of socio-economic development, to bridge the infrastructure deficit and to create employment opportunities for our young population.

Buoyed by this rapid and sustainable economic growth, India is seeking to play a role commensurate with her size, potential, civilisational heritage and destiny. We have sought to be a reasonable and moderating force in the UN Security Council, to which India was elected in October last year as a non-permanent member for 2011-2012. India has continued to support strongly the processes of reform and restructuring of the UN, including expansion of the permanent membership of the UN Security Council to make it better equipped to respond effectively to an era of transformational change in global affairs.

One of the dominant themes in recent years has been the shift in the centre of gravity of the global economic landscape from advanced economies to emerging economies, particularly those in Asia. Our relationships with the countries of South Asia, particularly our neighbours, which have always been a matter of high priority for us, assume greater significance in this context. Since South Asia is going to be a key beneficiary of this tectonic shift, both India and Sri Lanka must factor this key trend into their bilateral relationship. Accelerated economic development of a large economy like India’s obviously creates significant opportunities for Sri Lanka, which is already our leading economic partner in South Asia. Some spin-offs for Sri Lanka in this partnership are expanded trade, increased bilateral investments, surge in tourism, improved connectivity and a growing knowledge partnership.

Last year, India was Sri Lanka’s largest trading partner and also emerged as the number one source country in terms of foreign tourist arrivals and foreign direct investment. The growing engagement with India has facilitated creation of new capacities in the Sri Lankan economy in diverse sectors ranging from civil aviation and hospitality to ports and dockyards. A good example of this partnership is the India-Sri Lanka Free Trade Agreement which has yielded positive dividends over the past decade. Discussions on a comprehensive framework for enhanced economic cooperation are now underway and I do hope that the coming months will see the fruition of these efforts to the mutual benefit of both our countries.

Mahatma Gandhi called Sri Lanka the ‘nearest neighbour’ to India. It is through that prism that we see our ties. For Sri Lanka, the end of three decades of internal conflict has brought historic opportunities. Today, Sri Lanka is poised to take advantage of the peace dividend. India, as its closest neighbour, is prepared to be Sri Lanka’s partner in this journey. India has always been committed to the unity, sovereignty and territorial integrity of Sri Lanka and to the restoration of lasting peace through reconciliation. It is our hope that the vision and leadership that resulted in an end to armed conflict will now be employed in the quest for a genuine political settlement resulting in national reconciliation among all the communities of Sri Lanka. We will continue to support Sri Lanka’s commitment to heal the wounds of the past and to build a caring society which ensures a life of equality and dignity to all its citizens.

An important building block for this process and in our development partnership is the rehabilitation of the devastated lives of internally displaced people in conflict-affected areas. India has contributed and will continue to contribute to the humanitarian relief, rehabilitation and resettlement of Internally Displaced Persons in Sri Lanka. Our assistance package of INR 5 billion (US$ 110 million approximately) for immediate relief and resettlement is under implementation, while we move towards longer-term reconstruction activities.

India’s developmental assistance is entirely based on the priorities set by the Government and people of Sri Lanka. In recent months, our assistance has been stepped up significantly to meet the challenges of reconstruction and resettlement in the North and the East of Sri Lanka. Last month, work commenced for wreck-removal and salvage at the Kankesanthurai Harbour as part of a larger project to rehabilitate the Harbour, which will help restore traditional commercial linkages, both domestic and regional, and give a fillip to economic activity by encouraging trade.

Another major initiative is the project for construction of 50,000 houses, for IDPs in the Northern and Eastern Provinces and for estate workers in Central and Uva Provinces of Sri Lanka, under a grant provided by the Government of India. I am happy to note that work on the ground has already started and houses are beginning to come up under the pilot project. The project for reconstruction of railway lines in Northern Sri Lanka, under a Government of India Line of Credit of US $800 million, is also making rapid progress. Work is proceeding smoothly on the Southern Railway Project under another concessional credit line of US$ 167.4 million. India is also assisting in the rehabilitation of the Palaly Airport, restoration of Duraiappa stadium, construction of a Cultural Centre at Jaffna, refurbishing schools and hospitals, assisting fishing communities, setting up vocational training centres at Batticaloa and Nuwara Eliya, assisting war affected women in Batticaloa through a training and employment generation project and helping in the revival of agriculture through provision of tractors, seeds and agricultural implements. We have also started construction of a 150-bed multi-specialty hospital at Dickoya in the Central Province under a grant from the Government of India. In June this year, ferry services between the two countries were resumed after about 30 years with the commencement of the passenger ferry service between Tuticorin in India and Colombo in Sri Lanka.

In the spirit of our close and multi-faceted ties, the year has already witnessed several high-level official visits in both directions. We have had the privilege of receiving His Excellency the President of Sri Lanka in India on three occasions since June last year. The Hon’ble Speaker of the Sri Lankan Parliament led important delegations to India twice in a span of three weeks. The Hon’ble Speaker of the Lok Sabha of India visited Sri Lanka in February this year. Parliamentary Friendship Groups have been revived in both our Parliaments. There have been several ministerial visits. In the coming months, we look forward to maintaining the frequency of such exchanges between our two countries.

India and Sri Lanka, knit together by the ties of history, geography and culture, are destined to play key roles in the coming rise of Asia. Our partnership must therefore progress in the spirit of being the closest of neighbours and friends whose destinies are interlinked. On this day, we rededicate ourselves to this ideal. 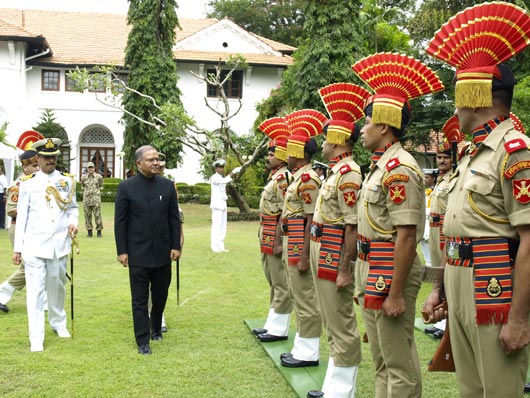