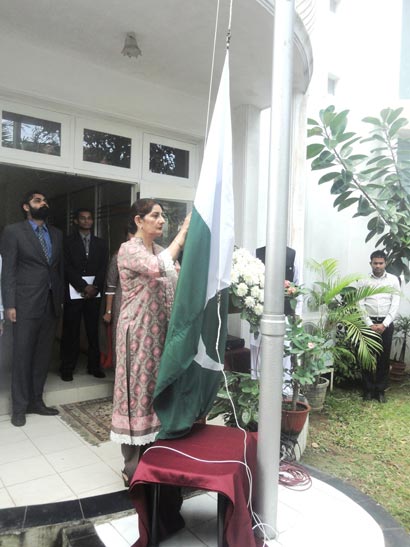 The High Commission of Pakistan and the Pakistani community in Sri Lanka celebrated the 65th Independence Day of Pakistan with traditional fervor and resolve to make Pakistan a strong, dynamic progressive tolerant and democratic Islamic welfare state.

The High Commissioner of Pakistan in Sri Lanka, H.E Seema Ilahi Baloch hoisted the national flag of Pakistan in an auspicious ceremony held at Pakistan High Commission in Colombo on 14 August to mark the occasion. Later, the messages of the President and the Prime Minister of the Islamic Republic of Pakistan were read out to the participants.

The High Commissioner of Pakistan in her message on the occasion said “the creation of Pakistan epitomized the successful culmination of a long, hard, struggle against heavy odds, under the inspiring and dynamic leadership of our founding father Quaid-i-Azam Muhammad Ali Jinnah. The Independence Day signifies the contributions and sacrifices of our leaders and forefathers. It is also an occasion to renew our commitment to the vision and ideals for which Pakistan was created. To continue our efforts to build a strong, prosperous and democratic Pakistan with economic progress, tolerance and moderation as the principal planks of our future vision. Pakistan’s relations with Sri Lanka have remained cordial and cooperative throughout.  Links between our two peoples and cultures date back to the time when the Indus Valley Civilization, the Gandhara civilizations and the Buddhist culture had prospered in what is now Pakistan.  Both countries have made persevering efforts to build on these solid foundations and further strengthen the bonds of friendship and cooperation”.

She added that the future is promising for the Pakistani & Sri Lankan two nations.  As Pakistan grapples successfully with some significant challenges, its direction and course ahead is solidly defined as a progressive, moderate, tolerant and prosperous society.  Following consistent economic performance over the last five years, despite the odds, there is hope for the future.

The ceremony was attended by the members of various diplomatic Missions, prominent Sri Lankan personalities and Pakistani community in Sri Lanka from various walks of life including a large section of media.