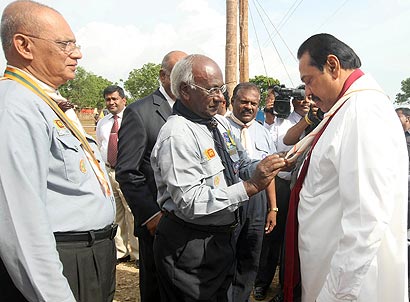 The Eighth National Scout Jamboree organized by the Sri Lanka Scouts Association commenced today on 27 December at the International Stadium in Eraminiyaya, Angunakolapelessa in Hambantota under the patronage of President Mahinda Rajapaksa as the Chief Guest.

The President was received by the Chief Commissioner of the Sri Lanka Scouts Association Mr C.Batuwandala. Later he was escorted by a Scout and a guild guide in to the Jamboree and received the Guard of Honour by senior Scouts and Cadets. As the chief guest President Rajapaksa hoisted the Jamboree flag and made the announcement of the commencement of the 8th National Scout Jamboree in Hambantota.

Addressing the participants President Rajapaksa said that the aim of scouting is to train young children from the beginning in character building to become self-dependent and useful citizens and dedicate themselves for the society and country. The President further said that Sri Lanka’s future depends on the young generation and if they are happy, skillful, educated and properly disciplined the country would have a bright future.

Mr Shiras Sali, The Jamboree Organizer and Assistant Chief Commissioner (International) said that the closing ceremony will take place on 30th December. Around 15,000 Scouts from all districts have participated the event without ethnic, gender and religious differences and first time in the history 500 girl guides also joined this year Jamboree, he further added.

This year more than 650 Scouts representing Northern districts have participated in the Jamboree. It coincides with a special cycle parade “Yaalpanamen Magampurayata” by the Scouts from the North to the South organised by the Association from 19 December and ended today (27) with the opening ceremony of the National Jamboree, with the participation of the Chief Scout of Sri Lanka, President Mahinda Rajapaksa. It started from Point Pedro in Jaffna and proceeded towards Angunakolapelessa via Vavuniya Kandy, Colombo, Matara and reached the eighth National Jamboree today to hand-over National Flag to Chief Scout, the President of Sri Lanka.

The Sri Lanka Scout Association will celebrate its centenary of scouting in 2012. Scouts Commissioner C. Batuwangala said this Jamboree would strengthen the Asia – Pacific Scouts Jamboree that is to be staged in Dambulla, Sri Lanka in next year.