A bold new strategic direction for Sri Lanka without India 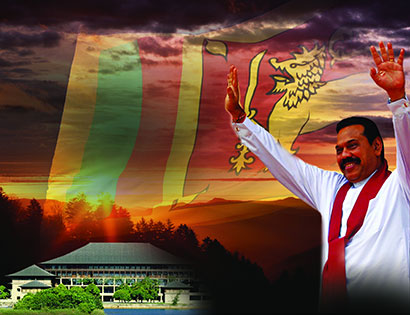 It is now 4 years since the end of terrorism in Sri Lanka. Instead of accolades for becoming the only nation to eliminate terrorism Sri Lanka is being subject to harassment by the US-European-Indian axis of evil and this is unlikely to cede any time soon. The humiliation that the Sri Lankan External Affairs Ministry continuously subjects Sri Lanka to must stop. We may be a small nation but we have an ancient history to be proud of. Our kings were held in esteem and respected for the manner the country was led. Where are we going wrong? Obviously the policy of begging, appeasing or striking deals with the enemy is not the course Sri Lanka should take and we must put a full stop to this ugly practice. We must draw upon the same energy that weathered the odds and boldly refused to give in to pressure which won us the war. Our battle now must be to charter a new bolder strategic direction with that same energetic commitment with a new strategy and policy in place. That course must start by understanding who our enemies are and that includes both local and international.

Sri Lanka must come to terms with reality. Sri Lanka cannot maintain relations with a country that functions to dictates of domestic politics. We cannot as a sovereign nation watch with bated breath as to how Tamil Nadu politicians exert pressure on India’s Central Government and watch as India’s Central Government passively succumbs. This drama has gone on for far too long – it is time we woke up to the reality that we are not playing a role in kollywood. Moreover, despite what we feel about the Indian Governments we have never treated Indians arriving in Sri Lanka differently. Can India say the same – our pilgrims are attacked, our children going to take part in sports are attacked, our missions/offices are stoned, our military personnel are asked to leave or face consequences….and India’s reaction is just a statement.

India has not shown any reason for us to change our opinions of India. The destabilizing policy adopted by successive Indian Governments is unlikely to change. At no time has India shown it has genuine intentions of treating Sri Lanka as a sovereign nation and respecting Sri Lanka’s territorial integrity. We should not be fooled by diplomatic statements. None of these statements have changed the manner India has chosen to join US and EU nations to denigrate Sri Lanka when its own backyard is anything but clean.

Yet Sri Lanka’s Government has allowed India to establish itself through a series of investment drives that lead us to question how detrimental these investments are to Sri Lanka given the way India is insulting Sri Lanka by its allegiance to the West-backed Resolution at the UN. No friend would do what India did and is doing and we can but ask what the Sri Lankan Government is doing by continuously allowing India to fortify key areas inside Sri Lanka. When India has been functioning as an enemy would these investments and Indian presence not be to Sri Lanka’s disadvantage?

In analyzing the current wave of deals, agreements proposals etc between nations and the manner nations have been given concessions, tax holidays etc we can but conclude that these officials have been functioning against the interest of the country.

Public officials do not need to be repeatedly told or lectured that in reading through the clauses of proposals made by nations it is their duty to put the interests of the country first. They do not need to be told that in evaluating the risks of proposals made it is of paramount importance to ensure the sovereignty of the nation and the territorial integrity of Sri Lanka nor the people’s rights gets violated.

However, it is the abject negligence of these principles that have led to a series of agreements signed that are detrimental to the nation and we see these happening before our very eyes. Granting Indians to enter Sri Lanka on tourist visa with the plan to use them to work on farms with a lame excuse that there is a shortage of farmers was just one instance and officials had to quickly deny and put a stop to the influx of Indians arriving in Sri Lanka following public outrage. Yet they appear not to know how many Indians are even in Sri Lanka as at present. Can our nation function in this manner where it takes the public to be alert whilst the public officials are asleep or simply do not care to view things in a larger picture.

Investors must enter with a win-win deal and that win-win must be for the country and not the officials signing the deals. Giving India all the investments in Sri Lanka is unlikely to get Sri Lanka anywhere and these short term gains that do not even bring anything to the public is likely to lead to a very dangerous scenario at all levels.

The other examples include Sampoor coal power plant – many in the public put forward their views on why Sri Lanka should not enter the agreement not only because of the cost factor but because eventually India will decide how Sri Lanka should receive electricity. Plenty of warnings were also given not to allow India to hold any prime property in the heart of Colombo because it would then allow India to spy on virtually everything that happens in Colombo and the defense and naval establishments – those warnings too were ignored.

There is also a plant being set up by the Indians in Hambantota by starting a dummy company in Singapore and it is not very difficult to get deals through when officials are easy to bribe. These Indian entities would end up jeopardizing China’s interest and China is likely to walk away and Sri Lanka would have lost another key investor and a key world power ally.

Moreover, we need to be all the while mindful that the balkanization of India is what steers the West’s interest in Asia. Tamil Nadu is a key state being targeted. It is having an unprecedented wave of Christian influence, its economic growth is far above the other states in India, the state has a nuclear base, its natural assets and port are all reasons why the West would want to provide autonomy to Tamil Nadu and using the Tamil factor in Sri Lanka is a perfect way to start that ball rolling. If India wishes to play into the West’s plan it is their business but that is no reason Sri Lanka should dig its own grave too.

Sri Lanka’s future cannot depend on making diplomatic trips to nations and begging these countries to support Sri Lanka. That may be a favorite pastime of the head of the external affairs ministry but those trips at the cost of the Sri Lankan taxpayer has not reaped any benefits to date.

The recipe of appeasing has not worked and we need to finally accept this. Countries that have a plan to destabilize Sri Lanka will not change that course of action just because we send an emissary begging for breathing space. We now need to charter our own destiny and a country that proudly went to war despite the odds and despite tremendous pressures to put a halt to that onward march should take a leaf from its own success story.

Sri Lanka cannot be allowed to be destroyed by its own people. It is obvious that the strategy of the West is to get our own people to bury us and most of the catastrophes Sri Lanka has faced of late have been because of our own doing. Sri Lanka cannot be destroyed by CORRUPT PUBLIC OFFICIALS HOLDING POSTS IN CRITICAL SECTORS like POWER, PORTS and FINANCE who are functioning worse than politicians. It appears their weak corners have been perfectly targeted by vested external interests and they are getting their agendas through easily.

This is evident by the manner these officials are making Sri Lanka into a very docile situation leading to a possible Greece like scenario. When we can be borrowing from friends and allies at lower interest why are we opting for the most dangerous option of going for bond issues where bonds are held by nations hostile to us? Will any of these corrupt officials have answers? Most probably they will abandon the “regime” and the country and flee as we have seen similar corrupt officials do in the past and some of these have strong links to the LTTE.

The concern of the public remains how far the Government is aware of the need to always protect the national security of the country in all its policies formulated with a neighbor that has been using successive Governments to destabilize Sri Lanka. This knowledge should have been enough to ensure that any investments with India do not compromise Sri Lanka’s sovereignty.

It is a good time for the leaders and policy makers to assess how far India has been allowed to make inroads into Sri Lanka and how adversely it is likely to affect even the power held by the politicians in the long term. All short term gains may have a golden lining but the clouds that prevail beyond that especially for them is something that should at least make them finally wake up.

We need to see some measured change in the way India is being allowed to raise their stakes in Sri Lanka because it appears that we are slowly having our sovereignty usurped from us while our attention is being diverted to other corners.

The best solution for Sri Lanka is to reassess who our real friends have been not those who say they are our friends but betray us continuously. We do not need to apologize to the US-EU-Indian axis of evil which says one thing but does the opposite. We should not go behind such countries any more. They must learn to respect nations.

Sri Lanka’s future will be powerfully placed if we learn to chart our future by forging strong bonds with our natural allies since history and allies that have never betrayed us in times of need. That list of nations should not be hard to compile.

We need to say goodbye to appeasement and begin a new chapter in how we use our geopolitical presence to Sri Lanka’s advantage.