A development-oriented budget for people’s uplift 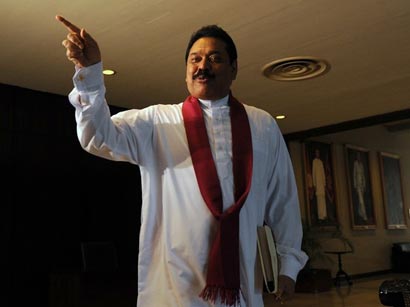 Post war economic recovery and long-term plans for improving the quality of life of the people were the main themes of budget 2012 presented by President Mahinda Rajapaksa in Parliament yesterday. Accordingly, a significant increase in budgetary allocations were made to the relevant ministries towards realizing these objectives, such as, Education, Higher Education, Economic Development and Health.

The tourism industry which plays a major role in the development of the country was also given a huge boost with tax concessions and other incentives to attract investors to this vital sector.

The 2012 budget has also proposed five-year tax holidays on all capital investments made by Sri Lankans returning from abroad.

Among the incentives granted to investors is a 6-12 year tax holiday for investments in the range of Rs 300-2,500 million. Incentives to encourage the expansion of existing enterprises will also be granted.

The President also announced relief for public servants in the form of a salary hike of 10 percent of their basic salary.

The non-staff category will be given this increase from January 2012.

The President said that he proposed to make relevant amendment to reduce upfront cost incurred on account of importation of related machinery and equipment.

“There are many challenges when it comes to strengthening the public enterprises which have been neglected over a long period of time. One challenge is to find competent and professionally qualified persons to manage such enterprise.

The President said while maintaining public investment at around 6 to 7 percent of GDP during the next six years, private investment will be incentivized to reach 26-28 per cent of GDP by encouraging priority sectors to engage in more export oriented and import replacement activities.

He also said that he proposed to provide incentives for manufacturers and new investors to invest in such fields.

He said that the allocation on health at national and provincial level in 2012 through Western and Indigenous medical services is Rs. 105 billion.

The President proposed a system through which children will be selected from G.C.E Advanced Level, either to enter university or to pursue skills development, so as to ensure that all children will get an opportunity to develop their skills. The budget also proposed Rs 8,617 million be allocated for vocational education.

The budget 2012 also proposed to allocate a sum of Rs 500 million to undertake special accelerated vocational education programmes on a priority basis in the field of tourism, IT, construction and beauty care.

The budget also proposed to make an additional allocation of Rs 300 million to construct permanent quarters for the security establishment and to improve human resources development of the Forces in addition to Rs 230 billion allocated for the Security Forces in the budget.

President Rajapaksa also proposed to extend the application of the proposal that he announced in the last budget to grant Rs 100,000 at the birth of the third child of any member of the Security Forces, to those who are serving in the Police Force as well.

He also proposed a monthly allowance of Rs 750 to each parent of members of the Security Forces, including the parents of valiant soldiers who sacrificed their prime age for the country. President Rajapaksa added that the members of the Security Forces are involved in demining, rehabilitation of affected areas and urban development related work to the value of around Rs 5,400 million. With regard to the online visa arrangement, President Mahinda Rajapaksa said that, there will be no fee charged on a tourist who spends 48 hours within island and no visa fee will be charged from children to promote family travel.

To help the Small and Medium Scale Industries, the President proposed that the Bank of Ceylon, People’s Bank and the Regional Development Bank each sets up an SME bank branch in all districts within 2012 . The President invited all other banking and financial institutions to also set up such branches in all districts.

He said he proposed to reduce the prevailing income tax rate from 28 percent to 24 percent for the interest income from such banking and other fee levying activities. A 50 percent Government Guarantee will be given to those banks providing loans to restructure, SMEs to improve their performances.

“Budget deficit we have to manage during the year 2012 is Rs 469 billion. This is 6.8 percent of GDP, whereas it was 8 percent of GDP in 2010. Since virtually the entire budget deficit is on account of development and welfare expenditure, I believe that it will contribute towards long-term development of the country while addressing many facets of poverty,” he added.

The President called on the Opposition to support the government when steps are taken in the interest of the nation.

“The tendency of those in the Opposition parties to work in separate groups is not healthy for the country. They should stand by together for the political vision of their parties, while setting aside personal differences and being humble and mature enough to rectify any wrongs of the past.