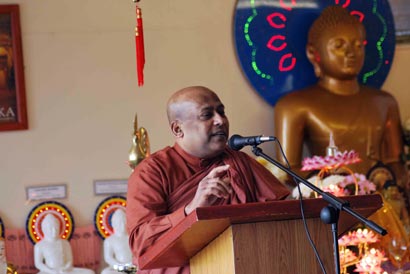 On the occasion of celebrating Sri Lanka’s 62nd Independence Day, a religious ceremony was organised to invoke blessings for the country, the nation, the newly re-elected president Mahinda Rajapaksa and Ranaviruwo, at the Birmingham Buddhist Maha Vihara premises on 14th February from 11.00am to 3.00pm with the participation of a large crowd of Sri Lankan nationals and well-wishers.

A special feature of this ceremony was the enthusiasm shown by the Diaspora to celebrate the landslide victory of the President in a fitting manner in appreciation of the liberation of motherland from three decades of brutal terrorism. This is the first celebration organised in the UK to celebrate President Mahinda Rajapaksa’s victory at the election, which was held on 26th January.

The event commenced with taking Five Precepts and offering Buddha Puja and Dhana to Maha Sangha. By 12.00 noon lunch was served to all the participants. At the ceremony, religious observance was conducted by the Chief Incumbent of the Birmingham Buddhist Maha Vihara, Venerable Dr Witharandeniye Kassapa (OBE) Nayaka Thero to invoke blessings on President Mahinda Rajapaksa, war heroes and the people of Sri Lanka followed by the observance of a two minutes silence in honour of national heroes.

Later the Nayaka Thero delivered the introduction of the ceremony and congratulated the President of Sri Lanka and also expressed his gratitude to the people who voted as a mark of unity and harmony. Elaborating further, Venerable Thero emphasized President Rajapaksa’s vision to develop Sri Lanka as the ‘Wonder of Asia’ with a view to ushering in a bright and prosperous future for all. Ven Thero further said that this is a victory for the people and the country, and hence all of us, as Sri Lankans, in a country free of terror must work together to ensure a brighter future for our children, a developed nation and an educated, morally rich society. Ven Thero emphasized the duty of the Maha Sangha when the nation is facing difficulties and also explained taking examples from the history how Maha Sanga and national heroes like Wariyapola Sumangala thero, Weera Keppetipola, Gongalegoda Banda and our great kings ruled the country by defeating different outside threats.

The welcome speech was delivered by Dr.M.B.Ranathunga, one of highly respected patriotic Sri Lankans in the UK, on behalf of the Sri Lankan community extended his congratulations and best wishes to President Mahinda Rajapaksa on his re-election for the 2nd term at the Presidential elections.

Speaking on the ceremony, Dr Ranathunga further said the President’s victory is a triumph for the people of Sri Lanka and that he is committed to carrying out his obligations by the people with a view to safeguarding democracy, freedom and rights for all. He also paid his gratitude to the genuine, non political leading members of the Sri Lankan community past and present in the UK, especially Gamini Keerthichandra (President- Sinhala Bala Mandalaya), Duglus Wickramaratne (President-Sinhala Association), Lional Balasuriya (Gemunu Hatana), Anura Senevirathne (Co-ordinator-Expat Hela Team) and few more for their commitment and dedication towards defeating Tamil Tiger activities and propaganda in Europe, and their contribution towards the motherland, which is amply demonstrated by their generosity towards the war heroes and their loved ones. He also acknowledged that they have given their best to their motherland amidst difficulties and Tamil Tiger threats.

Head of the Jethavana Buddhist Vihara, Birmingham, Venerable Keppetiyagoda Gunawansa Nayaka Thero said that dedication of the Rajapaksa family was amply demonstrated in the past by their dedication and nationalism for Ruhuna and on this occasion the most outstanding member of the family has won the hearts and minds of the entire nation by the outstanding victory by a massive majority.

Head of the Letchworth Dhamma Nikethanaya International Buddhist Centre, Ven Akurala Samitha thero addressed the gathering and said we must not split into factions, but stand as one. Ven Thero further explained the importance of the peace and said people of Sri Lanka must unite at this crucial juncture after defeating thirty years of terrorism, otherwise, devided we fall.

Reverend Father Tony De Alwis from the Diocese of Nottingham, Church of England said there are so many local and international evil forces try to cripple the hardly earned peace with supreme sacrifices. He showed the displayed two maps which explain the similarities between LTTE controlled areas before the elimination and the post presidential election results. Rev Fr paid his gratitude towards the people of Sri Lanka for voting President Rajapaksa and emphasized the need to give him a majority in the upcoming parliamentary elections to carry out unfinished tasks towards the prosperity and development of the country and protect and establish sovereignty and democracy. 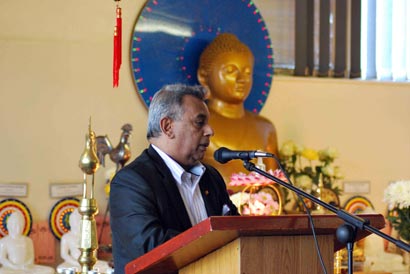 Chief Guest of the ceremony, High Commissioner for Sri Lanka in the UK Justice Nihal Jayasinghe also addressed the gathering. He explained the exceptional work carried out by the mission to counter Tamil Tiger activities and their fake propaganda in the UK. He further explained the huge support Ealamists receive from different pro Tamil Tiger movements, organisations and politicians for their personal gains. He further said that British authorities and establishments have not given priority to LTTE investigations like to Taleban or Al-Qaida activities and pointed out the double standards and lethargic approach to investigate LTTE crimes.

Finally Janaka Alahapperuma from British Sri Lankan Forum delivered the vote of thanks and said that many Sri Lankans in the UK helped voluntarily in numerous ways to crack down LTTE activities for last thirty odd years. They had no personal or political agendas and worked only for the betterment of the country and its people. However as usual among the genuine crowd there were few politically motivated short sighted people and they have caused damage to this noble work and slinging mud at the genuine group for their personal gains. He thanked the people those who genuinely help for such counter activities and also thanked everyone those who helped and contributed in numerous ways and attended the ceremony to make it a success.

Janaka Alahapperuma specially thanked Ven Witharandeniye Kassapa Nayaka Thero and Rev Fr Tony De Alwis for taking the initiative for organizing the ceremony and Ven Witharandeniye Samitha Thero for co-ordinating the event under the guidance of the Nayaka Thero. He also thanked Jayantha Perera (Video Recording), Thackshila Udage (Photographer) and Bandula Manage of Sesatha website, Col3negoriginal website and Sri Lankan media channels for the publicity given for the event.

At the end of the ceremony the National anthem was sung and refreshments were served to the delight of all.