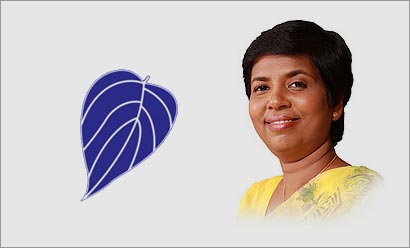 Those demanding the UnitedNations Human Rights Commission (UNHRC) to take up what they call Sri Lanka’s accountability issues had never been bothered when the LTTE was killing civilians in their thousands, UPFA parliamentarian Dr. Mrs. Sudarshini Fernandopulle says.

Sudarshani, in brief interview with The Island, emphasised the need for an effective mechanism to counter LTTEpropaganda. Some foreign politicians had become eelam propagandists due to their dependence on the votes of LTTE activists in their electorates, while some NGOs bashed Sri Lanka as that was the way they could get funds, she said. “A case in point is Wiki Leaks revelation of British Foreign Secretary David Miliband playing politics to gain pro-LTTE votes at the expense of Sri Lanka,” she said.

Dr. Fernandopulle said: “In fact, I hadn’t come across anyone raising accountability issues until the military brought the LTTE to its knees in May three years ago. The LTTE murdered my husband, Jeyaraj at the onset of eelam war IV. No one demanded accountability on the part of the LTTE. They assassinated Foreign Minister Lakshman Kadirgamar at his Colombo residence during the Norway arranged CFA. Western powers demanded that negotiations should continue, regardless of the foreign minister’s assassination.”

Sudarhani said that the LTTE had massacred villagers, blown up buses and trains packed with commuters, assassinated politicians and wreaked havoc by dropping bombs on Colombo and Katunayake. They had targeted Defence Secretary, Gotabhaya Rajapaksa and almost succeeded in assassinating the then Army Chief Gen. Sarath Fonseka at the start of eelam war IV, she pointed out. But those demanding a probe into SriLanka’s accountability issues never took tangible action against the LTTE or those LTTE front organisations based in the West and North America to force the outfit to eschew violence, she said.

Dr. Fernando pull challenged the critics of the government to produce evidence of their efforts to stop the LTTE from recruiting and using child soldiers as cannon fodder. The LTTE would never have been able to sustain its military onslaught without receiving a steady supply of children and funds from the West, she said. Those who declared the LTTE as the sole representative of the Tamil speaking people in the run-up to the General Election in Apr. 2004, thereby sanctioning child recruitment, were shedding crocodile tears today, she said.

Those who still represented the LTTE’s interests should be held accountable for killings and abductions by the LTTE, said Dr. Fernandopule. On the one hand, they want India to pardon those found guilty of assassinating former Premier Rajiv Gandhi and on the other hand, they want SriLanka’s political and military leaders hauled up before an international war crimes tribunal on the basis of unsubstantiated war crime allegations.

Widows of Gamini Dissanayake and Lakshman Kadirgamar could help the government counter LTTE propagandists effective, Dr. Fernandopulle said, adding that the other spouses and relatives of Tamil politicians and officials killed by the LTTE, too, should speak up.

Civilian victims of LTTE terrorism should be brought before the local and international media, Dr. Fernandopulle said. Citing anLTTE suicide attack on the Central Bank in Jan. 1996, she said those killed and maimed in that terror strike should not be forgotten by the international community. She said the government should ascertain the number of Tamil speaking civilians, including politicians and members of other Tamil armed groups killed by the LTTE since the assassination of Jaffna Mayor Alfred Duraiappa, in the ‘70s.

2 Responses to Accountability never an issue before conclusion of conflict, says UPFA MP