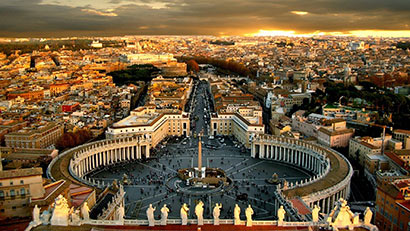 The Vatican City is a land locked state inside the city of Rom, Italy and governed by the Pope (Bishop of Rome). It is the world’s smallest sovereign on just 110 acres. The Pope is not only head of 2.3billion people but he is also head of a global financial empire. The Vatican that promotes giving and sharing is notoriously secretive about the riches it hoards. Its wealth ranges from treasures confiscated during the Inquisition, colonial rule and includes financial holdings, real estate, works of art and even a full-fledged media conglomerate which ensures nothing too controversial is relayed to the global public. While 2/3 of the world earns less than $2 a day, and 1/5 of the world is underfed or starving to death, the Vatican hoards the world’s wealth, profits from it on the stock market and at the same time preaches about giving. Yet, 842million are in hunger – 60 percent of the world’s hungry are women. 8,500 children per day die due to hunger. Nearly 1/2 of the world’s population — more than 3 billion people — live on less than $2.50 a day. The cost to end world hunger is $30 billion a year. U.S. spent $737 billion in 2012 on defense!

The Vatican City and the Holy See

There is a need to distinguish between the Vatican City and the Holy See. The Holy Se governs the nation. All contracts are signed by the Holy See. Its revenues are generated through donations from Catholics (Peter’s Pence), from interest and investments of its reserves in Western European currencies and bonds as well as in the New York Stock Exchange and even real estate. US Catholics had donated $97million to Peter’s Pence.

Origins of the Roman Catholic Church

The New Testament reveals that the Catholic Church did not have its origins in the teachings of Jesus or His apostles. The New Testament does not mention any papacy or Mary or to petition saints in heaven for their prayers or confession of sin to a priest.

To answer the question on the origins of the Catholic Church we need to be aware that Christianity was banned by the Roman Empire for the first 280 years of Christian history. The change came after Roman Emperor Constantine converted to Christianity and lifted the ban in 313AD but Constantine’s Christianity was one mixed with Roman paganism. Pagan beliefs became Christianized just as Christians absorb itself into other indigenous religions with ulterior motives.

Some of these paganisms include

a) cult of Isis (Egyptian mother-goddess) replaced Mary with reference to Queen of Heaven and Mary given an exalted role in order to attract Isis worshippers. Temples of Isis were converted to those dedicated to Mary. However, the Catholic Church denies the pagan connections to its origins though in reality these beliefs and practices have nothing to do with the Scripture. Yet, the truth remains that the Catholic Church ‘christianized’ pagan religions to make itself welcome to the Roman people.

b) Mithraism was replaced with Christianity. Mithraism was practiced by Roman soldiers of the Roman Empire from 1st – 5th centuries AD was a defacto religion without ‘official status’ of the Roman Empire. The sacrificial meal (eating flesh and drinking blood of a bull) was practiced by the Mithras. Those that took part in this meal was said to be granted salvation. Lord’s Supper/Christian communion replaced the Mithraism.

c) Romans were henotheists (believers of many gods but focused on one god as supreme –Roman god Jupiter supreme over pantheon gods, got Neptune god of the Oceans etc). Thus pantheon gods were replaced with saints.

d) the papacy was created with the support of the Roman emperors. Thus, the state and religion became centralized. When the Roman Empire collapsed it was just a matter of the Popes taking the titles that belonged to the Roman emperors – Pontifex Maximus.

This is why the Catholic Church is said to be an extension of the Roman Empire (Imperium Romanum).

Is it just a coincidence that the Roman terms are now clothed under papacy – Roman Governors now Archbishops, Roman Senators now Cardinals, Departments of Roman Senate now Congregations, Political ambassadors pro-nuncio and Roman Calendar and Holy Days of the gods now Calendar Holidays of the Saints? If voice of the Gods spoke through Caesar is the same function now done by the Pope? According to Roman Code of Canon Law a treaty signed with Rom makes Romans the head of the foreign country. It was only in 1984 that Ronald Reagan signed the treaty in the US and UK signed the treaty in 1982.

The Vatican was criticized for supporting Hitler during World War 2. The Pope blessed Hitler and named him ‘the envoy of God’

Over the past 50 years over 500 priests/bishops have been involved in sexual crimes against thousands of young boys and girls and violating their rights with no compensation given to the traumatized victims?

It is anyone’s guess how rich the Vatican is. It is anyone’s guess what lies beneath the basements of the Vatican where rumors of stolen artifacts, gold and silver pilfered from nations ever since the Inquisition remain unreturned to their rightful owners. The money in possession of the Church in reality belongs to their victims! Vatican City generates its income via tourism through museum admissions, tours, stamps, coins and publications.

Who are these victims? Does the Catholic Church recall what they did to the Inca temples when Spain invaded South America? Inca temples were razed to the ground and on top of these Churches were built.

How rich is the Catholic Church?

The power of the Vatican is unlimited. It is a force that drives both rich and poor. It thrives on poverty because those depressed will believe in anything and anyone.

The chalice held by the Pope on his left hand has 122 diamonds (ranging from 3 to 27 karats). The chalice held in the right hand holds 72 diamonds (ranging from 3 to 15 karats) There are said to be dozens of similar chalices. There are 22 crowns which contain over 1700 diamonds and countless gems. The papal bathrooms are said to be over $100m dollars! These cannot be Christ’s hidden treasures!

The Associated Press estimated in 2004 that the Holy See’s real estate excluding St. Peter’s Basilica and the Sistine Chapel was worth a billion dollars.

The Vatican Bank also known as the Institute for Works on Religion (IOR) is a financial institution founded in 1942 with a mandate to safeguard and administer property for the Church and its activities. It is also known as the world’s most secretive bank. It is amusing as to why the Vatican Bank should keep records secret when large part of the donations are from the faithful and they number 1.2billion and expanding.

The Vatican Bank has been accused of money laundering with Italian authorities seizing $30m from Vatican’s account in Italy’s Credito Artigano Spa. The New York Times claims that the Vatican Bank has 33,000 accounts and 20,772 clients with close to 70% the clergy.

The Economist has revealed that Church owned entities in the US spent $170billion in 2010 but why is the revenue never disclosed? Incidentally, only 16 companies have more than $170billion in revenues in the US! That should speak volumes of the amount that the Church is not disclosing!

According to Ivan Ruggiero, the Holy See’s chief accountant, Vatican’s real estate is worth about 700 million euro ($1.21 billion), not including its priceless art treasures,

The Church’s financial structure is said to be as a result of cash originally handed over by Mussolini in return for papal recognition of the Italian fascist regime in 1929 which the Vatican takes great pains to keep secret.

“The Vatican has large investments with the Rothschilds of Britain, France and America, with the Hambros Bank, with the Credit Suisse in London and Zurich. In the United States it has large investments with the Morgan Bank, the Chase-Manhattan Bank, the First National Bank of New York, the Bankers Trust Company, and others. The Vatican has billions of shares in the most powerful international corporations such as Gulf Oil, Shell, General Motors, Bethlehem Steel, General Electric, International Business Machines, T.W.A., etc. At a conservative estimate, these amount to more than 500 million dollars in the U.S.A. alone. The Vatican’s treasure of solid gold has been estimated by the United Nations World Magazine to amount to several billion dollars. A large bulk of this is stored in gold ingots with the U.S. Federal Reserve Bank, while banks in England and Switzerland hold the rest. But this is just a small portion of the wealth of the Vatican, which in the U.S. alone, is greater than that of the five wealthiest giant corporations of the country. When to that is added all the real estate, property, stocks and shares abroad, then the staggering accumulation of the wealth of the Catholic church becomes so formidable as to defy any rational assessment.” (Avro Manhattan)

“. . . this morning, I flushed my toilet with a solid gold lever edged with diamonds and at this very moment, bishops and cardinals are using a bathroom on the second floor of the papal palace which trappings, I am told, would draw more than fifty million dollars at auction . . . Believe me, one day, we who live in opulence, while so many are dying because they have nothing, will have to answer to Jesus as to why we have not carried out His instruction, ‘Love thy neighbor as thyself.’ We, the clergy of the Church together with our congregations, who substitute gold and pomp and ceremony in place of Christ’s instruction, who judge our masquerade of singing His praises to be more precious than human life, will have the most to explain.”  (Pope John Paul 1st, 1978)

It is not difficult to realize why Pope John Paul 1 was murdered just 33days into the head of the Papacy.

Pope John Paul 1 ordered a complete review of the Church’s finances including global liquid assets. He was present for the internal audit of the Vatican Bank, he invited art dealers to appraise the value of art treasures, he surveyed the papal estate and 4 palaces and luxury resort city, he halved the bonus of the Vatican cardinals (which John Paul II raised to 18% after election), he decided to move to a small four room apartment. He decided to follow Christ’s advice “if thou be perfect, sell all that thou hast and give to the poor”. He did not wish to live in luxury amidst priceless art, architecture, jewels, gold and treasures while children all over the world were starving to death and he realized that the Church’s position on birth control was the reason for that starvation.

“Jesus was the poorest of the poor. Roman Catholicism, which claims to be His church, is the richest of the rich, the wealthiest institution on earth. (…) How come, that such an institution, ruling in the name of this same itinerant preacher, whose want was such that he had not even a pillow upon which to rest his head, is now so top-heavy with riches that she can rival – indeed, that she can put to shame – the combined might of the most redoubtable financial trusts, of the most potent industrial super-giants, and of the most prosperous global corporation of the world?” Avro Manhattan.

The Church and its leaders headed by the Pope are eternally preaching to give. It is a most noble and charitable request but why does that goodwill not start with the Church and in particular by removing all that’s hidden treasures in the basement and returning all that was stolen and thereafter making use of the investments to really eradicate poverty. None of the Church’s wealth realistically belongs to the Church and questions why they are not distributed amongst those that need it?