After execution, Sri Lanka to phase out maids going to Saudi 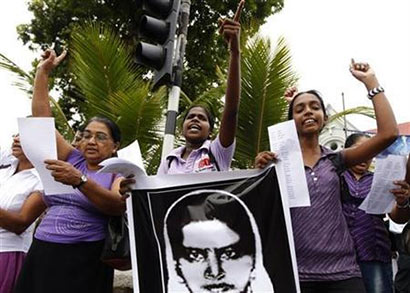 (Reuters) – Sri Lanka will gradually stop allowing women going to Saudi Arabia to be housemaids after a Sri Lankan was executed in the country over the death of an infant in her care, the Colombo government said on Thursday.

The Indian Ocean island nation recalled its envoy to Saudi Arabia in response to the beheading on January 9 of Rizana Nafeek, who was sentenced to death in 2007 accused of killing her employer’s daughter while she was bottle-feeding.

The government said it would raise the minimum age for female domestic workers to be eligible to seek employment in Saudi Arabia to 25 years from the present 21 with an eye on eventually stopping such employment altogether.

“Gradual phase-out is the idea,” said government spokesman Keheliya Rambukwella. “We can’t stop it overnight. It’s a gradual process and increasing the age limit is part of that.”

A third of the two million Sri Lankan maids working abroad are in Saudi Arabia, according to the country’s foreign employment bureau.

Expatriate worker remittance, the top foreign exchange earner in the $59 billion economy, hit a record $5.43 billion in the first 11 months of 2012, higher than its annual peak of $5.14 billion hit in 2011, central bank data showed.

Many households in the Middle East are highly dependent on housemaids from African and South Asian countries.

In some cases of reported domestic abuse, maids have attacked the children of their employers after they were mistreated themselves. In the case of Nafeek, the Saudi Interior Ministry said, the infant was strangled after a dispute between her and the baby’s mother.

10 Responses to After execution, Sri Lanka to phase out maids going to Saudi

Home » After execution, Sri Lanka to phase out maids going to Saudi