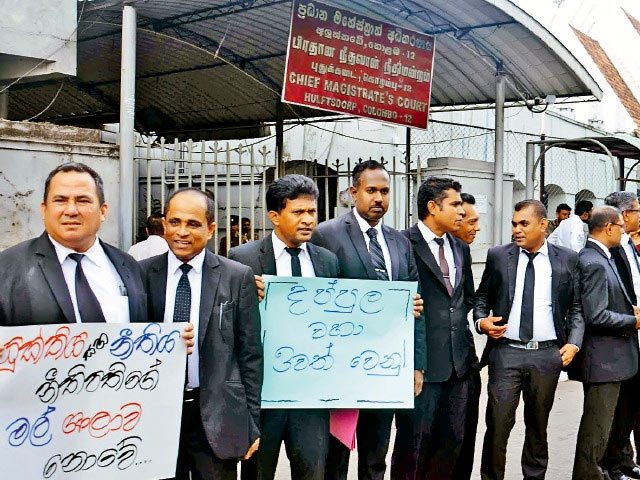 Lawyers at the Colombo Chief Magistrate’s Court engaged in a silent protest for the second time charging that the order given by Attorney General,  Dappula de Livera to Police to apprehend interdicted former Embilipitiya High Court Judge, Gihan Pilapitiya was both contrary to law and was arbitrary.

The Colombo Magistrate’s Court Lawyers Union (CMCLU) was engaged in the protest and Lawyer Gunaratna Wanninayaka said President Gotabaya Rajapaksa  had intervened to stall the arrest.

He then said notwithstanding the intervention of the President, the Attorney General had issued a second order to the Acting IGP to arrest Pilapitiya on 11 January.

Wanninayaka stressed that when the President gives such instructions, all State officers have to abide by those instructions and actions flouting such orders have to be deemed arbitrary.

He also warned that if measures were not taken to refrain apprehending Pilapitiya, action would be taken in conjunction with the All Ceylon Lawyers Association (ACLA) to thwart moves made to arrest Pilapitiya. Wanninayaka added that crass actions on the part of the Attorney General  would lead to people further losing their trust and confidence in the judiciary.

He remarked that already the CMCLU has submitted a letter to the President seeking his intervention to sort out the thorny issue.