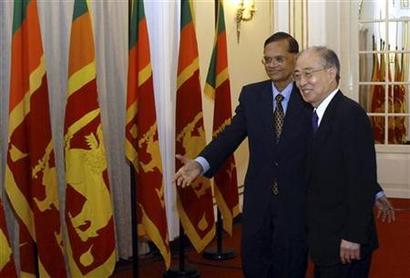 Japanese peace envoy Yasushi Akashi said “It is not for other governments or international organisations to dictate to Sri Lanka as to what it should be doing in the highly complicated and sensitive area of post war reconciliation.”

Sri Lanka has to design its own, reconciliation program but it has the wisdom in benefiting from other countries, experiences in the reconciliation process like South Africa or East Timor. Yet it would be a highly complicated process, he said. Answering a question, Akashi said war crimes issue is very complicated and comprehensive. “The due process which is transparent and comprehensible is being undertaken by the Government and we are glad that it is working and the Government was interested in making it work,” he said. He was addressing a press conference at the External Affairs Ministry, Colombo yesterday.

Japan has been one of the generous supporters of Sri Lanka. This year alone, Japan has provided 39 billion Yen as development aid to the country, visiting Japanese Special Envoy for peace building, rehabilitation and reconstruction in Sri Lanka, Yashushi Akashi said yesterday.

“Though priorities were given to the North and East, our assistance is without forgetting geographical ethnic and democratic position of the country without excluding any individuals or groups,” he said.

”Some funds would be devoted to the growth of human resources development and to develop small and medium enterprises, fisheries industry, building of schools, irrigation schemes, micro finance, for strengthening of Jaffna teaching hospital, and to construct roads, highways and bridges,” Akashi said.

with eminent people as its members. It has a wide ranging mandate. It is a part of the healing process. Its establishment has been welcomed by many foreign governments. Its work moves forward rapidly and effectively, he said.