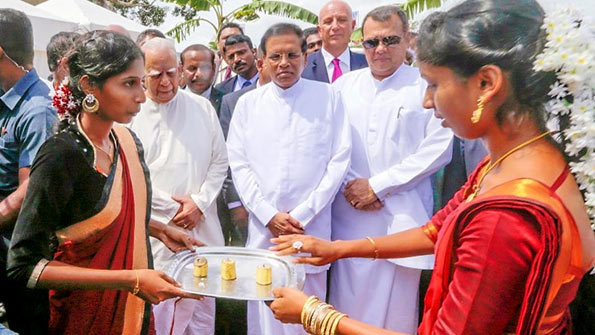 President Maithripala Sirisena has stated that all the educational institutions, including the universities and vocational training centers should act as reconciliation centers as well as the field of reconciliation should be included in the school curriculum as a subject.

The President referring to the incident occurred last week at the University of Jaffna expressed his deep concern in this regard and he further said that all our educational institutions should be reformed to prevent recurrence of such incident in the future.

He made these remarks during a ceremony to declare open the newly built Sri Lanka – German Technical Training Institute in Kilinochchi, yesterday (18). The Institute was built with the financial assistance of Germany.

President Sirisena recalled that on January 08,2015 the people of this country elected him as the President based on his policy statement presented in the election and he will fulfill all the promises given  in that without any hesitation.

The President also said that the Sinhala Buddhist community in this country will be able to live happily only after solving the issues pertaining to  other communities in the country and the first step in this regard is to acknowledge the people in the North has a problem to solve.

First, the President requested media heroes who hold media conferences in the South to visit the North and East to listen and understand the problems of people living there.

“With the introduction of a new constitution, we are trying to build a one country by uniting divided communities , but not to divide the country”, the President added.

He further said that there are many incidents of emerging new political forces and leaderships occurred in history of Sri Lanka and if such kind of forces are arise then those persons who are willing to take the leadership of them should be free of corruption allegations in addition to that a question will arise regarding those persons who are attempting to regain the power whether they are trying to promote fraud and  corruption again.

The President expressed his warm wishes to the German ambassador , Jürgen Morhard who are about to leave Sri Lanka following the end of his tenure and he also expressed his special thanks to the ambassador for his contribution in utilizing the German assistance to Sri Lanka more productively including the construction of this vocational training center .

1 Response to All educational institutions, including universities & vocational training centers should act as reconciliation centers – President