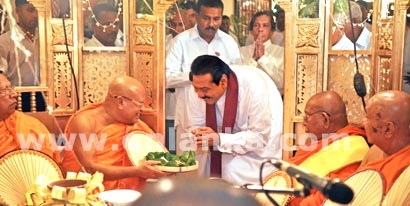 All night Pirith Chanting ceremony was held at the Sri Jayawardenapura-Kotte Parliamentary Complex last night on 18th April to invoke blessings on the country and the people before the convening of the maiden session of the seventh parliament on Thursday. At the inauguration of the religious ceremony, Venerable Velamitiyawe Kusaladhamma Nayaka Thero said that the President is aiming to make Sri Lanka a leading country in Asia. He has already eliminated the brutal terrorism which crippled the country’s developments for three decades and safeguards the unitary nature. Therefore it is a duty of all the parliamentarians those who have elected by the people, disregarding their political ideologies should extend fullest support to the President to steer the country towards prosperity and to create an ethical and disciplined society.

President Mahinda Rajapaksa also participated the Pirith sermon. An alms giving was offered to Maha Sangha this morning. These religious events were took place under the patronage of the President. The Parliamentary Secretary General in a special statement has called upon all newly elected parliamentarians and the staff to join in these religious programmes.

Pictures are seen here President Mahinda Rajapaksa, former speaker W.J.M.Lokubandara, all the elected MPs and staff of the parliament participating at the Pirith Chanting pinkama. 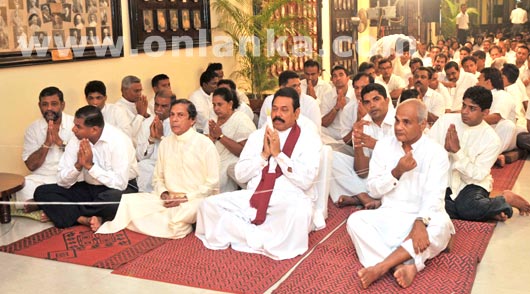