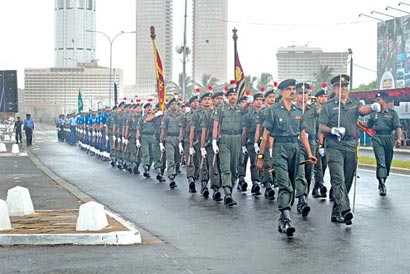 The nation will celebrate the second anniversary of the annihilation of one of the most ruthless terrorist outfits in the world, the LTTE, at a solemn ceremony at the Galle Face Green under the patronage of President Mahinda Rajapaksa today.

Over 24,000 members of the Security Forces who made the supreme sacrifice for the protection of the sovereignty and territorial integrity of the nation would be remembered by observing two minutes silence at the commencement of the state ceremony.

The Sri Lankan Forces succeeded in liberating thousands of people who had been in the clutches of terrorists on May 18, 2009, in a humanitarian operation that began with the closure of Mavil Aru sluice gates by the terrorists in 2006.

Over 9,000 members of Security Forces and the Police will participate in the colourful parade followed by the display of military hardware used by the forces in the eradication of terrorism. A 21 gun salute will be accorded to President Mahinda Rajapaksa who is also the Commander – in Chief of the Army. He will also receive a guard of honour by the members of the three armed forces.

Prime Minister D M Jayaratne, Speaker Chamal Rajapaksa, ministers and members of the diplomatic corps will be present at the event. Defence Secretary Gotabhaya Rajapaksa, commanders of the three forces and military leaders will also participate in the Victory Day celebrations.

The parade commanded by Security Forces Commander Killinochchi, Major General Nandana Udawatte is to begin with the conclusion of the address to the nation by President Rajapaksa. All facilities have been provided to the members of the public to witness this grand ceremony to pay tribute to the thousands of War Heroes.

According to Army spokesperson, Major General Ubaya Medawala, almost all members of the Sri Lankan Army who have made their contribution to the humanitarian operation would mark their presence in the colourful parade.

The service personnel who were disabled in the operation would also join in the parade.

Four divisions of the Sri Lanka Navy will mark their presence at the second National Victory Day parade also.

Officials and sailors representing Northern, Wanni and Eastern naval commands will participate in the parade. According to Navy spokesperson Commander Kosala Warnakulasuriya, naval craft will navigate the sea off Galle Face Green parallel to the SLN parade. The genesis of terrorism in Sri Lanka was formed with the assassination of Jaffna Major Alfred Duraiappa in 1976 and thousands of civilians belonging to all communities in the country became victims of LTTE terrorism since then.

Military hardware including UAV squadrons based in Weerawila and other Air Force bases will also be on display at the celebrations.