All systems in place for LG polls today 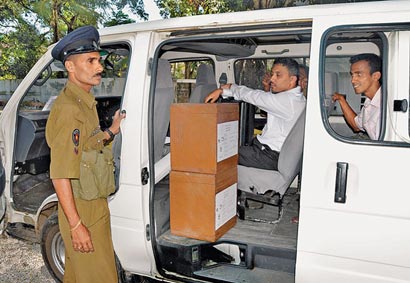 All arrangements are in place to hold a free and fair election today to elect 420 members to 23 Local Government bodies which include 17 Municipal Councils, one Urban Council and five Pradeshiya Sabhas.

Voters will cast their votes at 1,167 polling stations in areas where the elections are to be held today.

The highest number of candidates are contesting 53 seats in the Colombo Municipal Council.

Elections Department sources yesterday said the first results of the Local Government election can be expected by midnight today.

The results of the Local Government elections are to be released through the Information Department. Counting of ballot papers would be conducted at district level and the final results are to be scrutinized by the Elections Secretariat in Rajagiriya.

The results of Colombo and Dehiwala-Mount Lavinia Municipal Councils would be issued on the basis of electorates and the postal vote results of these two Local Government institutions would also be issued separately.

The final results of other 21 Local Government bodies would be issued on the basis of Local Government institutions. The Department officials yesterday stressed that strict regulations would be in place over the videoing and photographing of polling centres.

The media is allowed to cover the casting of vote by the President, Prime Minister, Speaker and the Opposition leader only.

Photographing or videoing of polling stations and casting of votes is completely prohibited and the Senior Presiding Officers who allow to take photos of those casting votes other than the President, Prime Minister, Speaker and Opposition Leader would not be deployed in election duties in the future, the Elections Department officials revealed.

Meanwhile, Deputy Inspector General for Elections, Gamini Nawaratne yesterday told the Daily News any person involved in violation of Local Government elections law would be arrested irrespective of their status in society.

Nawaratne said that Police have received 150 complaints of election related incidents and 95 of them are violations of election law.

“Over 200 persons who were accused of violating election laws were arrested by the Police, he said.

He said that 45 vehicles were also arrested by the Police by yesterday.

The government also secured a comfortable victory in the second phase of the Local Authorities elections 2011 winning a total of 45 out of 65 Local Councils. The main opposition United National Party (UNP) and the Janatha Vimukthi Peramuna (JVP) failed to win even a single Local Council at the election.

The win gave the UPFA control over 75 percent of Local Councils by securing victors in of 250 out of 299 Local Government bodies.

3 Responses to All systems in place for LG polls today

Home » All systems in place for LG polls today