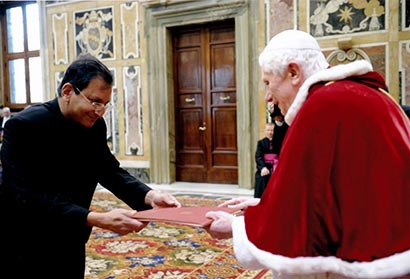 Sri Lanka’s Permanent Representative to the United Nations in Geneva Ravinatha Aryasinha, who is concurrently accredited to the Holy See, presented his credentials to His Holiness Pope Benedict XVI on the 13th of December 2012 at a ceremony held at the Apostolic Palace at the Vatican. His Eminence Cardinal Tarcisio Bertone, Secretary of State of the Holy See, and other high officials of the Vatican, also attended the ceremony which was held to mark the presentation of credentials of Non-resident Ambassadors from Zambia, Thailand, St. Vincent and the Grenadines, Niger, Guinea and Sri Lanka.

Addressing the six new Ambassadors, Pope Benedict XVI noted the importance of education, referring to it as one of the principal challenges of the present time. He further invited the countries represented by the ambassadors to contribute to the education of the new generation by promoting a healthy anthropology, saying that it is “the essential basis for all true education, and consonant with our common natural heritage.” His Holiness noted further that countries, should as a starting point, review the various problems that exist within those countries, especially where certain political and economic policies may risk a gradual erosion of ‘anthropological and spiritual heritages, which have been refined through the centuries and patiently constructed on foundations that respect the essence of the human person in all its variety and in perfect harmony with the cosmos.’ In his concluding remarks, Pope Benedict XVI extended his greetings to the Catholic communities in the countries represented by the Ambassadors, highlighting the crucial role that the Church plays in the advancement of their countries, particularly in the area of education of children and young people.

In his message to the Holy Father, Ambassador Aryasinha traced the historic relations between the Holy See and Sri Lanka and noted the constructive contribution of the Church towards the areas of education, healthcare, social services and post-conflict development in the country. He explained the significant developments taking place in Sri Lanka since the restoration of peace in the country, in the areas of resettlement of the displaced, re-integration of ex-combattants,  reconciliation between all communities, economic and infrastructure advancements in the former conflict affected areas as well as other parts of the country, and the noteworthy growth in the tourist sector. Ambassador Aryasinha, in his message, said “as Sri Lanka builds on a new era of peace, stability and equality, where the multicultural, multi-religious and multiethnic dimension that the country is renowned takes primacy the pivotal role that can be played by religious leaders in this regard, had been readily recognized”. Noting “the important contribution and dedication of the Roman Catholic Church towards inter-religious dialogue and socio-cultural development in Sri Lanka”, Ambassador Aryasinha made special mention of “the valuable services rendered by His Eminence Cardinal Malcolm Ranjith”. He also appreciated the  “contribution made towards this end by the Holy See through the Apostolic Nuncio in Colombo, and the generous donor assistance by Caritas International and its associated charities”.

In correlation to the theme addressed by the Holy Father, Ambassador Aryasinha expressed the country’s deep commitment toward the advancement of younger generations as key to the country’s post-conflict rebuilding and reconciliation process. He explained that the Government was infusing “more capital from the national budget to strengthen sectors such as education and health, to ensure the well being and development of children and youth, in whose hands the future of the country lies”.

During his visit to the Vatican Ambassador Aryasinha also met with His Eminence Cardinal Bertone and the Heads of a number of pontifical councils on the side lines of the main ceremony, where he was able to provide a full brief of developments taking place in Sri Lanka and explore areas of mutual interest.

The complete message presented by Ambassador Ravinatha Aryasinha to His Holinessis attached.