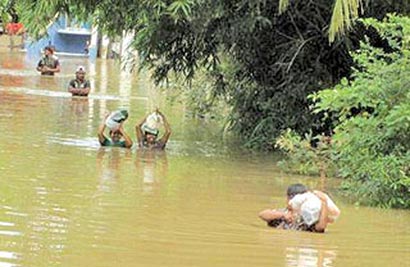 Three more deaths from floods and and earth slips were reported yesterday, bringing the death toll to 23 while the number missing rose to 15 and injured to 34. The Disaster Management Centre (DMC) said relief for those affected is being provided and rescue operations were being conducted by the Army, Navy and the Police. The DMC said the number of families affected by heavy rains, winds, landslides and floods increased. It said the number of flood-affected families increased by 20,798 and affected persons by 88,882.

A total of 266,740 persons from over 68904 families have been affected by floods, landslides and cyclonic winds that accompanied torrential rains in several parts of the country during the past few days.

One hundred and forty one houses in Matale, Kandy, Polonnaruwa, Batticaloa, Badulla, Monaragala and Kegalle were totally damaged while 805 houses have been partially damaged. The worst affected was Batticaloa district.