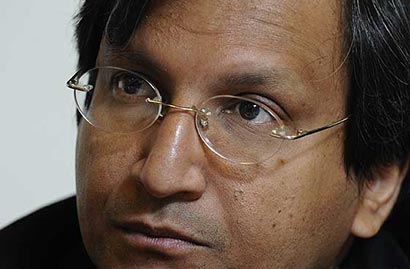 Sri Lanka’s Permanent Representative to the UN in Geneva Ambassador Ravinatha Aryasinha, has said “the draft resolution on Sri Lanka deposited with the Human Rights Council by a core group comprising – the USA, UK, Mauritius, Montenegro and Macedonia, violates the constitutional provisions of Sri Lanka, is highly intrusive in nature and is in breach of the sovereignty of the Sri Lankan people and the territorial integrity of Sri Lanka”. “In being politicised and in clear contravention of accepted principles of conduct in the Council”, he said, “the resolution sets a bad precedent, and can in the medium-to-long term have an adverse impact on all developing countries in the Council”.

Ambassador Aryasinha made this observation in an intervention made at the commencement of the first informal meeting called by the sponsors of the draft resolution on Sri Lanka and held in Geneva on 7 March 2014.

Full statement made by Ambassador Aryasinha:

Intervention by Ambassador Ravinatha Aryasinha, Permanent Representative of Sri Lanka to the UN in Geneva, at the first informal meeting called by the sponsors of the draft resolution on Sri Lanka – 7 March 2014

Excellency,
Anyone unaware of the ground situation in Sri Lanka walking into the Human Rights Council over the past week, or for that matter this room today, could not be blamed for thinking that Sri Lanka is the most troubled place on this planet.

The draft text before you gives one the feeling that the core group presenting this resolution – the USA, UK, Mauritius, Montenegro and Macedonia, should be reminded that Sri Lanka, like many Asian, African and Latin American countries represented here today, emerged from the yoke of colonialism as far back as in 1948. They also conveniently forget that Sri Lanka for nearly 30 years confronted one of the world’s most ruthless terrorist organizations, the Liberation Tigers of Tamil Eelam (LTTE) and that following an almost 3 year long humanitarian operation eventually brought to safety 300,000 innocent civilians who had been held as human shields by the LTTE. Since 19 May 2009 while not a single life has been lost due terrorism, the significant progress made by Sri Lanka, including through the implementation of the National Plan of Action of the Lessons Learnt and Reconciliation Commission, has been detailed in the National Statement made by the Hon. Minister of External Affairs of Sri Lanka last Wednesday.

When juxtaposed with these achievements, the obsession shown by some, in their call for action on Sri Lanka, simply brings out their own sinister motives in relentlessly targeting Sri Lanka, mainly to appease pro-LTTE Tamil constituencies, for collateral electoral political gain. Rather than help Sri Lanka, it clearly hinders the reconciliation process currently underway.

It is against this backdrop that the Government of Sri Lanka (GOSL) believes that there is no objective or rational reason to justify the call for a third successive resolution on Sri Lanka during the current session of the HRC.

This said, I am here today, as I do not wish to dismiss the interest taken in Sri Lanka by member and observer states, representatives of international organizations and civil society, irrespective of whether such interest is justified or not. GOSL always has, and continues to remain engaged with all parties seeking a respectful and constructive dialogue on how to move the process of reconciliation in Sri Lanka forward. We hope this spirit of engagement will be reciprocated, and that member and observer states of the HRC will view developments in Sri Lanka with an open mind.

Madam Chair,
It must be borne in mind, that the intention of presenting yet another resolution on Sri Lanka in the Council was made known by the US to the GOSL in January this year, long before the High Commissioner’s Report was available, thus making clear that the process and the intent to do so were led by political imperatives, rather than an objective assessment of the situation on the ground, which as per Council mandate, would have need to base its assessment on the Report of the High Commissioner.

With regard to the report of the High Commissioner to this session on Sri Lanka titled A/HRC/25/23, my delegation in its statement at the High Level Segment has already made clear Sri Lanka’s position. Sri Lanka categorically rejected the recommendations in the Report, which reflected bias, and was tantamount to an unwarranted interference in the internal affairs of a sovereign state. The Report itself contained a substantial amount of erroneous information as well as misperceptions which Sri Lanka requested the OHCHR to correct through its Comments of the State on the Report A/HRC/25/G/9 which has been made public, though not reflected as an Addendum to the Report.

Having perused draft resolution 25/1, my delegation is surprised by the violation of Council procedure envisaged by this draft which is in clear contravention of the rules of procedure and the method of engagement that guide the Council. The draft resolution is an unjustified endeavour to vest the Office of the High Commissioner with an investigative mandate, as well as of monitoring and assessment, which are in clear violation of resolution 60/251 and the IB package, as well as GA resolution 48/141. Sri Lanka therefore rejects such disingenuous efforts on the part of the proponents of the resolution to by-pass the method of engagement of the Council, which could not only set bad precedents, but also have wider relevance to all member and observer states of the Council.

The change of title of the resolution from the last two years, while clearly exceeding the parameters of the High Commissioner’s Report A/HRC/25/23 to the current session, on which this resolution is purported to be based, also bring in to the new draft, wholly unsubstantiated and uncorroborated new allegations, and therefore widens the mandate of the resolution, reflecting the constant changing of goal posts the proponents of the resolution have been consistently resorting to, as well as manifesting their vested interests.

Further, the draft resolution violates the constitutional provisions of Sri Lanka, is highly intrusive in nature and is in breach of sovereignty of the Sri Lankan people and territorial integrity of Sri Lanka. It also goes against, the core values of the UDHR, core international human rights treaties and basic principles of law that postulate equality among all people, as well as GA resolution 60/251 and the IB package.

Therefore in being intrusive, politicised and in clear contravention of accepted principles of conduct in the Council, the resolution sets a bad precedent, and can in the medium-to-long term have an adverse impact on all developing countries in the Council.

Madam Chair,
In conclusion, we therefore call upon the proponents of the resolution to take cognizance of the reconciliation process in Sri Lanka. This is imperative at a time when Sri Lanka is implementing a comprehensive process of reconciliation involving all communities, having overcome the threat of terrorism after a 30-year conflict. Coercive measures which do not pay due regard to tangible processes on the ground, and are of an intrusive nature, would only impinge upon the delicate balance in reconciliation underway in the country.

Madam Chair, I thank you for having provided GOSL an opportunity to present its views, and would like to add that this would be the only intervention we will make at this informal meeting.