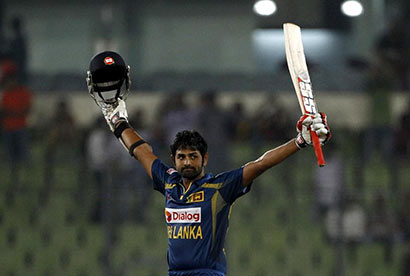 Thirimanne added 156 for the third wicket with Mahela Jayawardene (75) as Sri Lanka scored 261-5 in 46.2 overs after pace bowler Lasith Malinga’s haul of 5-56 had helped restrict Pakistan to 260-5.

Thirimanne and Malinga had also starred in Sri Lanka’s 12-run win over Pakistan earlier in the league. Thirimanne scored 102 in that game while Malinga had bagged 5-52.

Thirimanne started cautiously but dominated the bowling with some clever placements behind the wicket.

He struck 13 fours off 108 balls and set up the platform for Sri Lanka’s fifth Asia Cup title along with Jayawardene, who got his first half-century in 13 ODI innings.

Jayawardene, who struck nine fours and one six off 93 balls, was lucky to be dropped by Mohammad Hafeez at the cover boundary off Umar Gul when on 52.

Thirimanne and Jayawardene came together at a tricky time as Saeed Ajmal had just pegged the team back with a twin-blow when Sri Lanka was cruising along at 56-0 in 10 overs.

The off-spinner foxed well-set opener Kusal Perera (42) as the batsman came down the track, missed the line of the ball and was stumped comprehensively by Umar Akmal.

In-form batsman Kumar Sangakkara, who scored a century and two half-centuries in the tournament, was trapped lbw off the very next ball playing the wrong line as he failed to read the away-going ‘doosra’ delivery.

Ajmal also bowled Thirimanne later in the innings but it was too late to change the course of the match.

“I’m happy to have scored runs against Pakistan,” Thirimanne said. “I wanted to bat through the innings today because 260 is a gettable total but we needed someone to hang in there. Malinga bowled really well and (since) we had the momentum, we wanted to keep it.”

Earlier, another left-handed opener had done the star turn for Pakistan. Fawad Alam struck a maiden ODI century to help put up a fighting score after Pakistan was struggling at 18-3 at one stage.

Alam remained not out on 114 off 134 balls with eight fours and three sixes. He shared a 122-run fourth-wicket stand with captain Misbah-ul-Haq (65).

Alam and Misbah batted together for 32.1 overs to effectively see off the danger of a mediocre score. It was slow progress in the mid overs with Sri Lanka often keeping seven fielders inside the 30-yard circle.

But the batsmen opened up in time to swell the total and the partnership was broken when Misbah holed out to long on off Malinga during the batting power-play taken from 36 overs onwards.

Alam saw wicketkeeper Kumar Sangakkara fail to latch on to a difficult overhead catch off Suranga Lakmal on 41 and was let off again by Chaturanga de Silva at cover on 92. Alam got to his century with a six over mid-wicket off Thisara Perera.

Earlier, Malinga, who returned to the team after being rested for the previous game against Bangladesh, seized the early initiative for Sri Lanka after Pakistan elected to bat.

He had left-hander Sharjeel Khan caught at wide mid-on and then dismissed both Ahmed Shehzad and Hafeez — both caught by Sangakkara with fine out-swinging deliveries — for an opening spell analysis of 3-13.