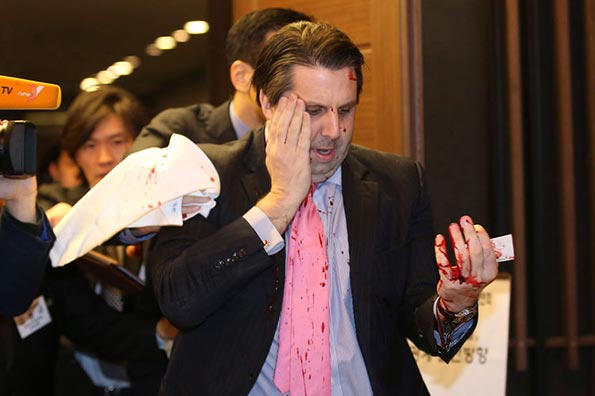 (CNN) – The U.S. Ambassador to South Korea, Mark Lippert, was attacked in Seoul, and is in stable condition, receiving treatment at a local hospital, according to the U.S. embassy.

According to Seoul police, Lippert was slashed on his right cheek and hand with a knife measuring about 10 inches long at 5:42 p.m. ET on Wednesday.

A South Korean news agency reported that the suspect was opposed to the joint South Korea-U.S. military drills that launched earlier this week, but Seoul police said the motive for the attack and how it was organized are under investigation.
State Department spokeswoman Marie Harf confirmed the ambassador had been attacked while giving a speech in Seoul Thursday morning, and said that the South Korean embassy is coordinating with local law enforcement on the attack.

“We strongly condemn this act of violence. The ambassador is being treated at a local hospital. His injuries are not life threatening,” she said.

South Korean president, Park Geun-hye condemned the attack: “This incident is not only a physical attack on the U.S. ambassador, but an attack on the South Korea-U.S. alliance and it can never be tolerated.”

She pledged a “thorough investigation and strengthening” of protection.

Lippert is a longtime friend and confidant of President Barack Obama, who has been a member of his inner circle since the President’s time as senator. According to National Security Council spokeswoman Bernadette Meehan, Obama called Lippert to wish him well.

“The President called U.S. Ambassador to the Republic of Korea, Mark Lippert, to tell him that he and his wife Robyn are in his thoughts and prayers, and to wish him the very best for a speedy recovery,” Meehan said in a statement.

According to local police chief Yoon Myung-seon, the event was organized by the Korea Council For Reconciliation and Cooperation, and the suspect in the attack was a member of the council.

According to South Korean news agency Yonhap, the suspect is a 55-year-old man with the last name “Kim,” who authorities say was opposed to the joint South Korea-U.S. military drills that kicked off earlier this week.

Yonhap reported that the suspect came up from behind, pushed Lippert down on a table and started attacking him.

In July 2010, Kim received a suspended two-year prison sentence for throwing a piece of concrete at a Japanese Ambassador to South Korea, Yonhap said.
South Korea’s YTN news channel reported that Lippert was about to deliver a speech at a breakfast being held at Sejong Hall in Seoul. The report says nothing specific about the attack, only that yelling was heard and then the bloodied ambassador was taken to the hospital.

The suspect was reportedly detained and is currently under investigation.

Lippert has been close to Obama ever since he arrived in the Senate in 2005. Lippert worked with Obama on the Senate Foreign Relations Committee and traveled the world with the senator as he garnered the foreign policy experience that helped pave the way for his presidential campaign.

When Obama declared he would run for president in the 2008 race, Lippert was by his side again, and was on the road with the candidate and ultimately served as the chief foreign policy adviser for the Obama campaign.

In 2007, Lippert was deployed as a Naval Reserve Lieutenant to Iraq to work as an intelligence officer with Navy SEALS.

A Wall Street Journal profile of the diplomat published that year detailed an anecdote in which Lippert received an email on his Blackberry from then-Sen. Obama which read, “I miss you, brother.”

Lippert’s deployment was not without irony, because he was in Iraq at a time when his boss was actively campaigning against what he said was a “dumb war.”

After his deployment, Lippert returned to Washington and served as deputy national security adviser and chief of staff for the National Security Council in the Obama White House. In October 2009, however, he decided to return to active duty. He was deployed to Afghanistan and he also served as an intelligence officer for the Naval Special Warfare Development Group in Virginia Beach.

“He is a close friend, and I admire and respect his devotion to our country and answering the call to active duty service,” Obama said in a statement at the time.

Lippert was nominated to be the top Asia policy official in the Pentagon in 2011, amid stories that he had clashed with former national security adviser, retired Gen. James Jones, while he served on the NSC.

Bob Woodward reported in his book, “Obama’s Wars,” that Jones resented Lippert and another former Senate aide Denis McDonough, who later was to become White House chief of staff, referring to them as part of the “politburo” who he thought thwarted the effective framing of policy.

Woodward reported in the book that Obama affectionately referred to the two close aides by the Dr. Seuss nickname of “Thing One and Thing Two.”