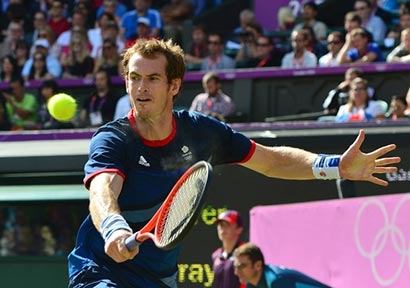 Andy Murray captured the biggest title of his career with an emphatic victory over Roger Federer in the Olympic men’s singles final at Wimbledon.

The 25-year-old Scot had never beaten Federer in a best-of-five-sets match and lost to him in the Wimbledon final.

He is the first British man to win the Olympic singles gold medal since Josiah Ritchie in 1908.

The pair face Belarusian top seeds Victoria Azarenka and Max Mirnyi knowing they are guaranteed at least a silver medal.

It continues a glorious home Games for Team GB, who sit third in the London 2012 medal table.

The last Briton to claim an Olympic men’s singles medal of any colour was Charles Dixon, who won silver at the 1920 Games in Antwerp.

The eighth seed overcame his Serbian opponent 7-5 6-4 in an hour and 48 minutes on Court One at Wimbledon.

An emotional Del Potro dropped to his knees in celebration as his support team leapt with joy in the stands.