Another documentary ahead of Geneva human rights session 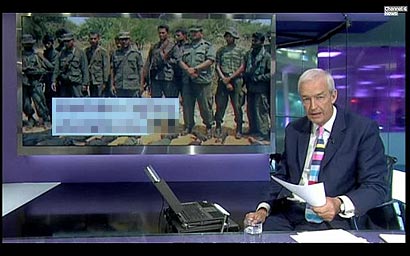 Those responsible for ‘Sri Lanka’s Killing Fields’ will telecast another documentary in the first week of March to coincide with United Nations Human Rights Council sessions in Geneva.

Government sources told The Sunday Island that the move was expected in the wake of the LTTE rump going flat out against Sri Lanka in the run-up to the forthcoming Geneva sessions, where the US would support a resolution targeting Sri Lanka.

Sources alleged that for those expecting to raise quick cash, Sri Lanka bashing seemed to be the easiest thing to do. They pointed out that the Canadian branch of the Amnesty International recently received 50,000 Canadian dollars from LTTE front, the Canadian Tamil Congress in return for its role in the ongoing anti-Sri Lanka campaign.

Asked whether the government was concerned about the US threat, sources said that the UN Human Rights Council was a grouping of 47 countries, which couldn’t be easily manipulated.

“The failure of the US to prevent UNHRC passing resolutions targeting Israel over war crime allegations is a case in point. Similar resolutions were also passed at the UN, though US strongly stood by the Jewish state.” They said that the handing of the controversial UN commissioned Goldstone report, which dealt with atrocities committed by the Israelis during Dec 2008 –Jan 2009 Gaza and the US response to it revealed the absurdity of US position on so-called accountability issues in Sri Lanka.

Those shedding crocodile tears for the LTTE should move the UNHRC to inquire into war crimes and crimes against humanity in Iraq, Afghanistan and Libya. In the wake of revelations made by whistle-blowing website, WikiLeaks on the basis of US military and diplomatic cables, the UN couldn’t ignore the need to investigate abuses committed by Western forces, they added.

4 Responses to Another documentary ahead of Geneva human rights session

Home » Another documentary ahead of Geneva human rights session