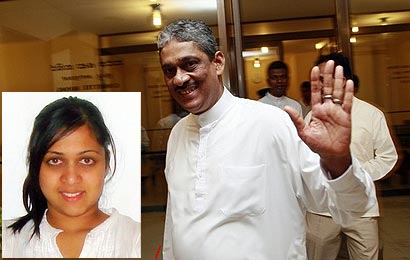 Sarath Fonseka’s daughter Apsara is to appear in overseas protest rallies demanding the release of former Sri Lankan Army commander (then) general Sarath Fonseka and the upholding of democracy in the country, sates the Janatha Vimukthi Peramuna (JVP).

Protests are to be staged in Milano on September 26, in Paris on October 02 and in Rome on October 3.

Leaders of several political parties and organizations are scheduled to participate in these protests, claims the JVP.

Mr. Herath had stated that the DNA is to take Sarath Fonseka’s case to the International Parliamentarians Union (IPU) and the Human Rights Commission. In addition, Anura kumara Dissanayake said they would take the matter up with the Commonwealth Parliamentary Association as well.