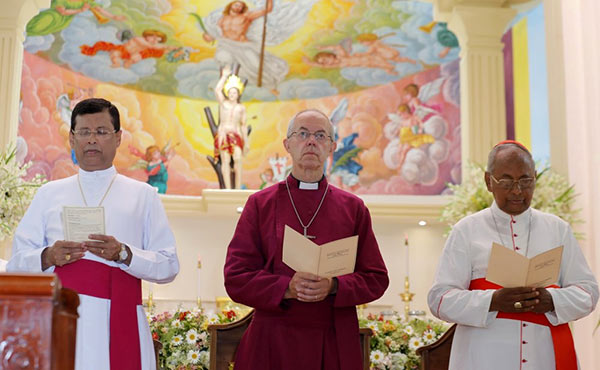 The Archbishop of Canterbury emphasized the need for Christian unity on Thursday as he paid tribute to the victims of the Easter Sunday bomb attacks at a Roman Catholic church in Sri Lanka.

The figurehead of the Church of England, Justin Welby visited St. Sebastian’s Church in the seaside town of Negombo soon after he arrived on a three-day visit to Sri Lanka.

More than 100 people died in the church in Negombo, known as “The Little Rome” for it dense Catholic population.

A total of 263 people were killed when seven suicide bombers from two local Muslim groups attacked three churches and three luxury hotels on April 21, in the worst violence by the Islamic State group-linked militants in South Asia.

“When they come to kill us do they ask if we are Anglicans or Pentecost or Presbyterian or Catholic? They ask only if we are Christian,” Welby said in his message, quoting a sermon by Pope Francis’ personal preacher delivered to the queen of England years ago.

“So when on Easter morning I heard of the terrible events in this church and other places in Sri Lanka, we knew that our sisters and brothers have been killed and wounded and we kept silence and prayed for you,” he told the congregation.

Welby was welcomed by the Archbishop of Colombo, Cardinal Malcolm Ranjith.

He knelt and bowed down on a spot of the glass-covered tiled floor where the suicide bomber set off the explosives at Easter Mass. The pockmarked area is preserved as a memorial.

“When I see this statue, this image of Christ covered with the blood of the martyrs; I know by that the courage, your faith and your love. I see the true Christ,” Welby said pointing to a blood splattered statue of Risen Christ kept in a glass enclosure.

Welby also thanked the Sri Lankan Christians for displaying restraint after the carnage.

“To come before you, I am almost without words; for I can only say thank you to the Christians of Sri Lanka.”

“We know that the Christ who on the cross said ‘Father forgive’ know our anger, your pain, your sorrow and we know that through his resurrection even that anger and sorrow and pain will be transformed in purity to hope,” he said.

He also laid white roses near a plaque with the names of those killed.

Welby is expected to meet Prime Minister Ranil Wickremesinghe and later preside over service in an Anglican cathedral in Colombo.

Welby’s visit came a month after Cardinal Ranjith — Sri Lanka’s most senior Roman Catholic — called for an independent and transparent commission to investigate the Easter attacks, saying justice had not yet been served. Ranjith said he has no faith in the investigations so far.

President Maithripala Sirisena has said he had been kept in the dark on intelligence about the planned attacks and vowed to “take stern action” against officials who failed to share it. He later appointed a presidential commission to investigate.

Following the attacks, national police chief Pujith Jayasundara was suspended and former Defense Secretary Hemasiri Fernando resigned. Both were later arrested after the presidential commission found grounds to charge them with dereliction of duties and criminal negligence. They were later released on bail.

The same commission has recommended taking criminal and disciplinary action against nine senior police officers for lapses in preventing and minimizing the attacks.

Separately, a parliamentary committee is looking into intelligence failures despite objections by Sirisena after some officials hinted at shortcomings by the president, who is also the defense minister and minister of police.