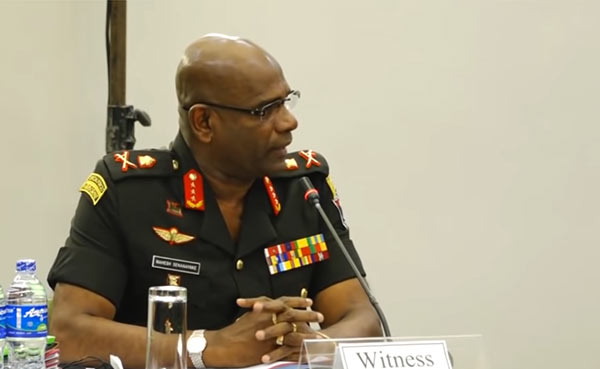 Army Commander Lt. Gen. Mahesh Senanayake, yesterday, said that there were some Islamic terrorists still operating at various places in the country and the threats they posed were far from over.

Testifying before the Parliamentary Select Committee probing the Easter Sunday carnage for the second time, Lt. Gen. Senanayake said that some Islamic terror suspects were still at large and there were confirmed reports to the effect that they were still carrying out clandestine operations.

Lt Gen Senanayake testified before the PSC earlier on June 26.

Field Marshal Fonseka: When you testified before this committee last time, you said that it was not 100 percent over. It is true and we have to accept it. Since the day that you said so and till now there have been several arrests. So it is not over. Some politicians have interpreted it in various ways and claimed that the problem was over. It is not so.

M.A. Sumanthiran: It is the opinion of the Field Marshal.

Field Marshal Fonseka: It is my opinion and what is your opinion? Do you think the problem is over?

Sumanthiran: You cannot question me. I am a member of the committee.

Dr. Wickremaratne: Each member of the committee is entitled to his opinion.

Field Marshal Fonseka: What is your opinion? When would our intelligence services warn us and save us from attacks similar to this?

LT Gen Senanayake: We cannot assure that it is over. We are not in a position to say that we can see this problem will be over within six months or six years.

Field Marshal Fonseka: When testifying the last time, you said that you had been aware of the network of terror before they staged the suicide attack. Is it true? What did you know? What action did you take?

LT Gen Senanayake: We had information pertaining to the spread of extremist Islamic network. When we sensed the danger we deployed more intelligence operatives and collected more information. We processed and verified it. Thereafter, we reported it to the Ministry of Defence. We handed over the information to the CNI, Director SIS and IGP Police. We recommended some arrests since we did not have powers to make arrest under the normal law. Now, under the Emergency laws we can. But then the arresting of those suspects should have been done by the police. We intimated our findings to them. Since we knew the network and shared such information with others, arrests had been within hours after the attacks. It was thanks to the information we furnished the arrests were made. We know that there are still some extremists.

Dr Jayatissa: Since when have you been reporting of the Islamic terror activities to the higher authorities?

Dr Jayatissa: Have you shared that information with others at the National Security Council? Have you discussed it at the NSC?

LT Gen Senanayake: We shared and discussed it. But I cannot say what they did with that information. We do not know how they processed it or why they did not arrest the persons we asked them to. Most of the time we not only reported certain facts but also recommended arrests of certain terror suspects, but we have no information of the follow-up actions by them.

Dr Jayatissa: What is the relationship between the Army and Director State Intelligence Service?

LT Gen Senanayake: We call each other. We may telephone or Whatsapp. But we are in contact. The contact between the Army and Director SIS is very regular.

Dr Jayatissa: Former Defence Secretary Hemasiri Fernando giving evidence here, said that the Army commander, that is you, had twice told him to act on information with regard to Islamic terror groups and alerted others in the defence establishment. You told him that the information you forwarded had not been received well. In your own words you and some others overlooked information you furnished. According to that testimony the SIS did not trust your intelligence warnings. There had been mistrust. Is it true?

LT Gen Senanayake: Now only I know that he had given that statement in his testimony. That was not about the SIS. The problem was with the Terrorist Investigation Division. The mistrust I mentioned to him was not with the SIS but with the TID.

Dr Jayatissa: Did not you receive it from the SIS?

Dr Jayatissa: Didn’t you receive any warning or information of the April 21 attack on that morning or the previous evening?

LT Gen Senanayake: If there had been such information, it should have been passed to us. That was not given to us. That did not happen. That was wrong.

Dr Wickremaratne: You mentioned of the TID’s lack of cooperation, could you elaborate?

Dr Wickremaratne: You mentioned that it was easy for you and police and other defence authorities to act fast now because the Ministry of Defence and Ministry of Law and Order operate as a single ministry. How is it easy?

LT Gen Senanayake: We could obtain permission and orders from a single entity and report back to it.

Prof Marasinghe: The former Defence Secretary said that everything but issues pertaining to national security was discussed at the NSC. He said that during the months before the attacks, the main topic was Makandure Madush. Was it true?

LT Gen Senanayake: That is true.

Prof Marasinghe: So that information you had been feeding to the NSC of the extremist elements was not discussed, was it?

LT Gen Senanayake: That was the problem.

Prof Marasinghe: Didn’t the Defence Secretary instruct you to make arrests on the basis of reports?

LT Gen Senanayake: That is not needed. It is the duty of the military and police to take action when it is reported. We, as the leaders of forces, should make that decision and take action. Within the framework of law we are operating, we are entitled to take action on the basis of information we receive at the NSC.

LT Gen Senanayake: I did not compare that with this incident. If that information of Easter Sunday attack had been shared with us, we would have been able to act.