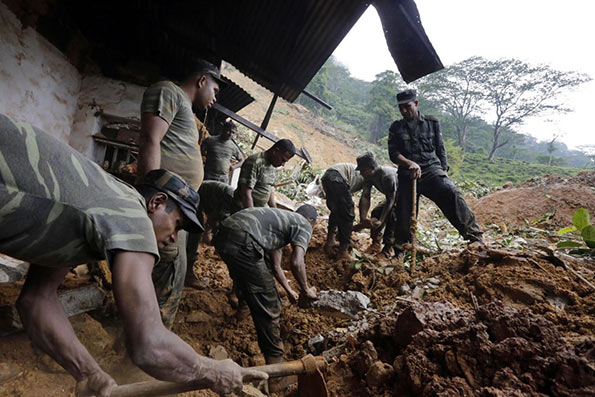 Around 150 people are feared dead after more than three days of heavy rain triggered two landslides in central Sri Lanka, disaster officials said on Wednesday as rescuers stopped work after recovering more than a dozen bodies.

Torrential rains have forced more than 223,000 people from their homes across the South Asian country, the latest official data showed. Seventeen bodies have been recovered, bringing the official death toll to 37, although that figure is likely to rise sharply.

Rescue efforts have focused on the town of Aranayaka, 100 km (60 miles) northeast of the capital, Colombo, where three villages were buried late on Tuesday in the central district of Kegalle.

“As at 1800 hours, 134 are still missing and 14 bodies recovered so far from the landslide site in Aranayaka,” Major General Sudantha Ranasinghe, officer in charge of rescue operation told Reuters.

“We have stopped the operations for the day since it’s dark and the operation continued for over 20 hours. We will start again tomorrow morning.”

More than 350 people were plucked to safety during rescue operations in landslide-affected areas early on Wednesday, officials said.

A Red Cross official who attended a disaster meeting at the Aranayaka landslide site said earlier it was feared the death toll would be “around 300-400”.

Police said another landslide at Bulathkopitiya, also in Kegalle district, had buried at least 16 people. Only three bodies were found from this site. In Kegalle district alone, 20 people were killed, disaster management centre data showed.

Military Spokesman Jayanath Jayaweera said 150 people who were rescued from Aranayaka had been sent to six camps set up for displaced people in the area.

Flooding and drought are cyclical in Sri Lanka, which is battered by a southern monsoon between May and September, while a northeastern monsoon runs from December to February.