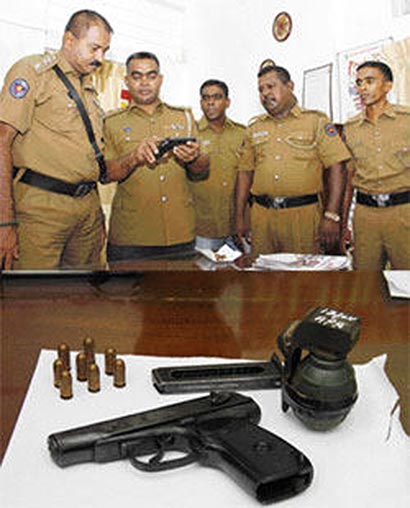 The special team led by Chief Inspector Hemantha Owitigama examines the micro pistol previously used by the LTTE. (Inset) The LTTEweapon with eights rounds of 8mm ammunition and a hand grenade taken into custody. Pix by Nishan S. Priyantha.

The arrest of an extortion gang leader with a micro pistol previously used by the LTTE led to the police obtaining information on the mastermind of the Colombo Museum robbery.

Chief Inspector Hemantha Owitigama of the Kotahena police in an interview with The Island yesterday said that information about the mastermind of the National Museum robbery had emerged following the arrest by a special team from the Kotahena police of eleven members of an extortion gang involved in the abduction of a garlic businessman and his driver at Maligawatte on August 14. He said a member of the gang called ‘Builder Prasad’, who masterminded the abduction of the businessman had, on interrogation, revealed details about the artefacts stolen from the National Museum.

‘Builder Parasad’, a close associate of ‘Kudu Lal’, who has fled the country, had been taken in following the arrest of the extortion gang leader, a former City Traffic and STF constable, who had in his possession a hand grenade, Chief Inspector Owitigama said, adding that the gang had been arrested on

August 17 following a complaint lodged by the businessman’s driver who gave his abductors the slip in Kelaniya.

Police found in Builder Prasad’s possession a micro pistol, which had been used by the LTTE. The weapon had Tamils letters embossed on it. Police received information that Builder Prasad had another pistol which he kept hidden at his residence in Maligawatte. On hearing that the police were planning to conduct a thorough search of his house, ‘Builder Prasad’ had instructed his son to remove the illegal items hidden there, Chief Inspector Owitigama said.

Builder Prasad’s son had taken the goods which happened to be artifacts stolen from the Museum and handed them over to his girlfriend in Piliyandala, who passed them on to her mother. Subsequently, the mother handed over the artefacts to another daughter of hers.

The artefacts ended up with a three wheeler driver who handed them over to the Piliyandala police. They were then shown to to a Museum officer who identified them immediately as the missing museum pieces.

Builder Prasad’ first revealed that he had purchased the artefacts for Rs. 4,000 from the main suspect who stole them from the National Museum, the police said.