ARUNCHAL PRADESH GETS FOURTH BUDDHIST CENTER IN INDIA FROM GOVT. 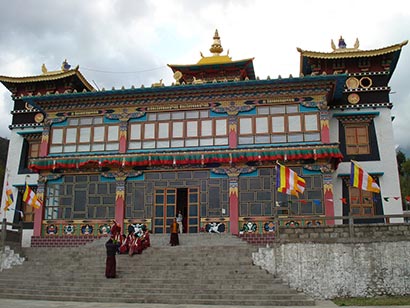 After Bihar, Uttar Pradesh and Jammu and Kashmir Arunchal Pradesh becomes the fourth state in India to receive the next fully fledged Buddhist Center by the allocation of funds by the  Central government of India.

Its founder Tsona Gontse Rinpoche announced The Central Institute of Himalayan Culture Studies at Dahung in West Kameng District will now attain the status due to New Delhi’s recognition.

In the West Kameng District, where the institute is located, the majority of people, and 13 percent of the population of the people of Arunchal Pradesh follow Buddhism. India’s largest monastery Tawang is also in Arunchal Pradesh.

The institute, conceived by Rinpoche in 2000, had received the approval of the Union Cabinet on May 26, 2010 with a project cost estimated at Rs 9 crore and recurring annual cost of Rs 124.86 lakh.

“It began with a central government grant of Rs 97 lakh and has since grown into a good institute to fill the vacuum in imparting education on Buddhism,” Rinpoche said.

“I had pursued the Centre to establish such an institute considering the large number of Buddhist population residing in the Northeast,” he said.

He pointed out that with only 25 faculty members and limited infrastructures, the institute has so far produced two batches (18 each) of Shastri (equivalent to BA in Buddhist Philosophy) degree holders.

Besides teaching arts and crafts for self-sufficiency and sustainable development and preservation of ethnic identity to foster national integrity, the institute has been inculcating an awareness on the ecological balance and preservation of natural resources, he said.