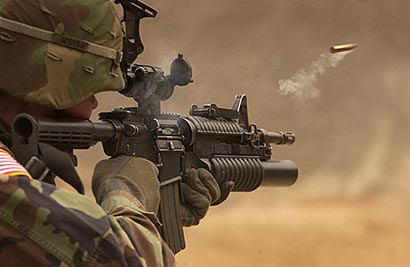 At least 16 civilians were reported killed in an apparent shooting by U.S. service member in southern Afghanistan

Foreign Media reports monitored by our desk reveal that a US Soldier walked out of his base in southern Afghanistan on Sunday and started shooting Afghan civilians.

Provincial governor said people were both killed and wounded in the early morning shooting spree in Panjwai district of Kandahar province,

A resident of the area has told an AP reporter that 16 people were killed as the U.S. service member went into three different houses and started shooting. The villager said he had talked to the family members of the dead.
NATO forces spokesman Justin Brockhoff said a U.S. service member had been detained as the alleged shooter but did not provide details on the incident.

The shooting comes after weeks of tense relations between U.S. forces and their Afghan hosts following the burning of Qurans and other religious materials at an American base. Though U.S. officials apologized and said the burning was an accident, the incident sparked violent protests and attacks that killed some 30 people. Six U.S. troops have been killed in attacks by their Afghan colleagues since the Quran burnings came to light.

Afghan officials say there are both dead and wounded after a U.S. service member walked out of his base in southern Afghanistan  and started shooting Afghan civilians.