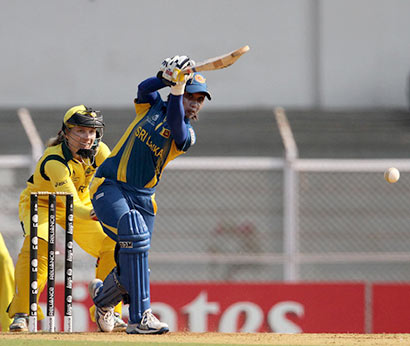 MUMBAI: Five-time champions Australia have entered the final of the ICC Women’s World Cup after thrashing Sri Lanka by nine wickets in their second Super Six match at the Brabourne Stadium on Sunday.

In reply to Sri Lanka’s paltry 131, Australia chased down the target in just 22.2 overs. This was Australia’s fifth successive victory in the tournament.

In contrast to the Sri Lankans, who took 206 deliveries to reach the three-digit mark, Australia scored at slightly faster pace than run-a-ball to get to 100 in only 96 balls.

Haynes scored an unbeaten 71 off 61 balls laced with nine fours and two sixes, while Lanning hit a 36-ball 37 studded with six fours and a six.

Prasadini Weerakkody was the only Lankan bowler to have picked up a wicket, getting rid of Lanning.

Earlier, put in to bat, Sri Lanka started on a disastrous note to be reeling at 41 for four before they eventually got all out for 131 in 45.2 overs.

Aussie off-spinner Erin Osborne was the pick of the bowlers, scalping three for nine from her 10 overs.

Incidentally this was Sri Lanka’s highest score against Australia, as they were earlier bundled out for 82 in 2000 and 57 in 2005.

One-down batter, Deepika Rasangika (43) anchored the innings to an extent and shared a 49-run stand with wicketkeeper-batter Dilani Manodara (21) to steer the team past 100-run mark.  (Courtesy: Times of India)