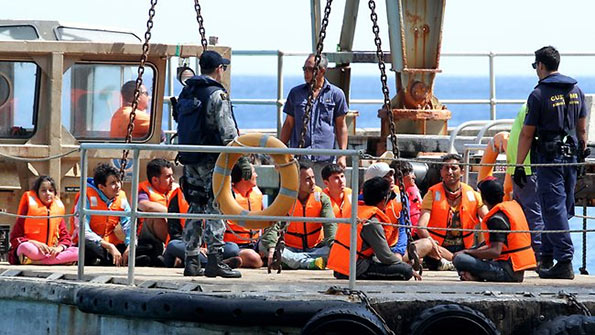 Sri Lankan asylum-seekers intercepted at sea could be handed back to their home countries if a Labor government assessed they were not owed refugee protection, Leader of the Australian Labor Party Bill Shorten has said.

The Opposition Leader, asked to elaborate on his vision today, confirmed that “like the government” he would want asylum-seekers returned to their home countries if possible.

“When it comes to the issue of returning boats to source countries, what we would do is, like the government, we would assess whether or not the people coming from the source country are in danger of persecution, we would make that assessment. We will, the Labor Party will, honour our obligations under the Refugee Convention,” Mr Shorten said in Melbourne.

The Coalition has come under fire for returning asylum-seekers to Sri Lanka, which has persecuted Tamils following the country’s civil war, and Vietnam, where communist authorities are cracking down on political dissent.

Mr Shorten declined to rule any countries out of the turn-back policy.

“You have to look at the circumstances of the asylum-seekers in terms of are they in danger of persecution in their home country,” he said.

“We would adhere to our obligations under the Refugee Convention.” Scott Morrison, who implemented Operation Sovereign Borders as immigration minister, criticised Labor’s approach as “a very bad karaoke version of the Coalition’s policy”. (The Australian)