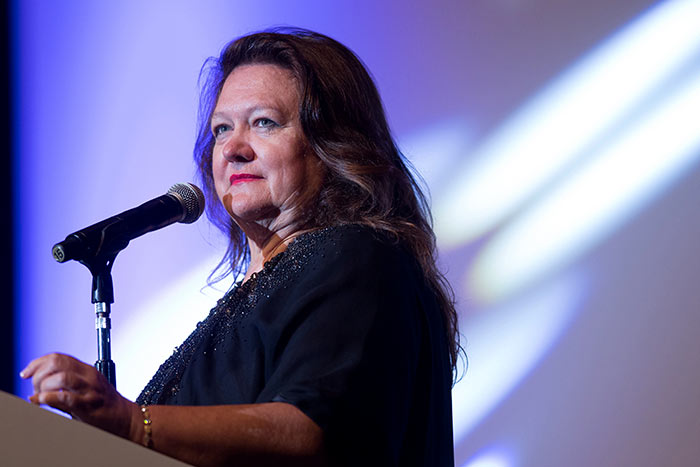 Gina Rinehart, Australia’s richest woman worth $31billion, has warned Australia is on the same track as Sri Lanka and Argentina in falling from prosperity to poverty due to a big-spending, regulation-heavy government.

The mining magnate, who is the country’s richest person with a net worth of $31billion, urged Australians to be ‘on guard’ against the ‘ruining effects of socialism’ in order to preserve the nation’s wealth, the Daily Mail reported.

‘For generation after generation, we have wanted to hand down a better country for our children,’ she wrote in her essay obtained in advance to Daily Mail Australia.

‘Sadly for this generation I believe this is now at risk, which the younger ones amongst us, in particular, should not want.’

Mrs Rinehart urged the Federal Government – which last year oversaw a record $167billion budget deficit, largely due to heavy spending to offset the crippling effect of Covid lockdowns – to show more fiscal restraint in the years to come.

‘Alluring political words of ”free this” and ”free that”, more taxpayers’ money for this or that, helped to turn once prosperous Ceylon, prosperous with its tea plantations and other agriculture, into a country which couldn’t support itself with food,’ she wrote using the British colonial name for Sri Lanka which became independent in 1948.

‘Instead, its people faced hunger, loss of free speech, consequent damaging riots, property damage, unhappiness, police and military, and a country name change as it struggled with the results of its socialist path.’

Mrs Rinehart, whose wealth soared by $2.2 billion in the six months to May this year due to surging iron ore prices, also cited Argentina – which was the world’s tenth wealthiest nation per capita in 1913 but now suffers political instability, inflation and a 42 per cent poverty rate – as a cautionary tale of big government.

‘The socialist policies of Peron and others saw incredible inflation, people unable to support their families, rioting; and the country has never regained its affluent position in the world, even 100 years later,’ she wrote, referencing Juan Peron, who nationalised Argentina’s large companies and set up social welfare programs when he became president in 1946.

‘Sadly, the economy ruining effects of socialism don’t just last between elections. They last much, much longer,’ Mrs Rinehart wrote.

‘We should be on guard against this and, in particular, the entitlement culture, big government, high taxes and government tape – these are problems that need to be faced, if we want Australia to continue to be the wonderful country that it has been.’

The 67-year-old Mrs Rinehart, who inherited her mining empire from her father Lang Hancock, said ‘agriculture, mining, small businesses, investment and defence are the keys to our nation and our future’ and urged the government to ‘stop making decisions influenced by the media of the moment and instead act to make the bold decisions our country needs.’

Prime Minster Scott Morrison has been accused by Labor of simply making announcements to grab headlines and control the news agenda rather than improve the country.

Ms Rinehart also called for the regulation burden on businesses to be reduced, saying the long-time owners of Fossil Downs, a cattle station in the Kimberleys, were forced to sell up due to ‘government tape’.

‘John, the husband of the owner and manager, had to get up around 4am each morning, like most do on stations in the far north, but he wasn’t able to get to bed until around 1am, still doing government paperwork,’ she wrote.

The mother of four also slammed ‘crazy laws’ in the Northern Territory which prevent farm owners killing crocodiles and wild dogs to protect their livestock and land-clearing restrictions which have made some properties more vulnerable to bushfires.

The report in October 2019 called for environmental regulation to be placed solely in the hands of the states to reduce red tape.

In July last year Mr Morrison presented to National Cabinet plans to devolve federal legislation under changes to the Environment Protection and Biodiversity Act which are currently before the senate.

‘These are prominent centre-right voices in Australia who have come together to provide the Coalition with a fresh sense of mission,’ he told Daily Mail Australia.

‘For the Australian centre-right, a publication of this magnitude has never been done before.’