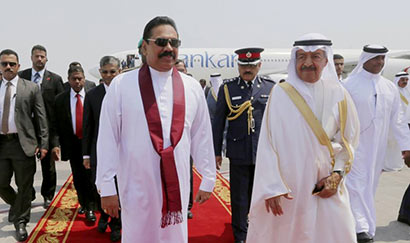 During the ceremony, the King of Bahrain, His Majesty King Hamad bin Isa Al-Khalifa said the medal is being presented to President Rajapaksa “in appreciation of your Excellency and your friendly country, and in recognition of the efforts you are personally exerting to move with bilateral ties to a higher level of development and progress.”

The Order of Al-Khalifa was founded in 1940 and revived in the 1970s. The medal honors the dedication of the late Amir Sheikh Isa bin Salman Al-Khalifa to humanitarianism. The medal has been presented to a handful of notable leaders including the King of Saudi Arabia, the Prime Minister of Malaysia and Queen Elizabeth II, among others.

Upon receiving the medal, President Rajapaksa said, “I am humbled and honored.” He continued to say, “With Bahrain, we seek to build an enhanced dynamic partnership. The kind words, gracious hospitality and warm interactions will leave enduring and fond memories of this state visit, for me and my delegation, which undoubtedly will translate into active cooperation.”