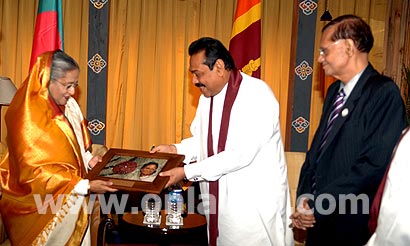 Prime Minister of Bangladesh Mrs.Shikh Hasina called on President Mahinda Rajapaksa at the Sri Lanka House on the sidelines of the 16th SAARC Summit in Thimpu, the capital city of Bhutan.

During the meeting both leaders discussed wide range of bilateral issues specially expanding and increasing investments, trade and business links between two SAARC nations. Mrs Hasina explained the huge demand for Bangladeshi ceramic, leather, pharmaceutical and other quality products around the world and the government’s investment friendly policy to attract new customers. Both leaders didn’t forget to congratulate each other for their landslide victories in recently held elections.

Later President Mahinda Rajapaksa had bilateral meeting with Mr.Syed Yosaf Gillani, the Prime Minister of Pakistan at Sri Lanka House in the SAARC village. During the discussions Pakistan Prime Minister said they would continue their assistance in Sri Lanka military training, its defence requirements and equipments. Pakistan leader also promised to extend their support to Sri Lanka Air Force. Both leaders agreed to promote their friendly relations in all fields especially defence, trade, business and sports.

Prime Minister Gillani also reiterated his earlier invitation extended to President of Sri Lanka to visit Pakistan. Pakistan is one of the major friendly allies of Sri Lanka at the war against terrorism.

Earlier President Mahinda Rajapaksa had bilateral discussions with President of Maldives Mohomed Naseed and Prime Minister of Nepal Madhav Kumar. He is also scheduled to hold bilateral talks with other SAARC leader including the Prime Minister of India Dr. Manmohan Singh with the sidelines of the summit on the final day. 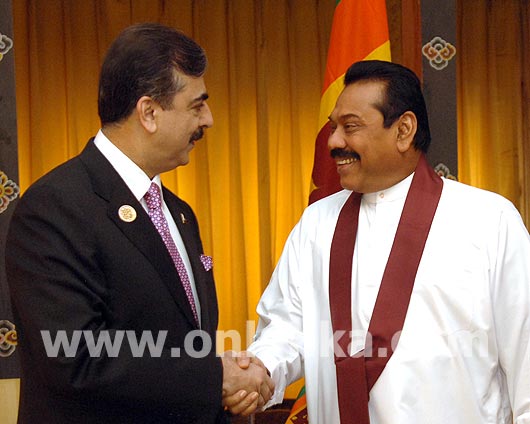