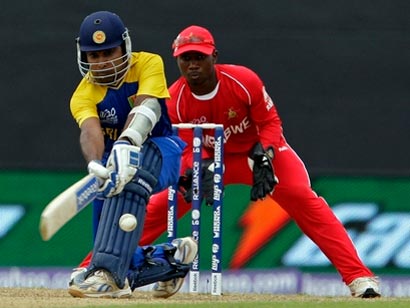 PROVIDENCE, Guyana (AP)—Mahela Jayawardene cracked a brilliant 100 off 63 balls Monday and Sri Lanka just beat the rain to defeat Zimbabwe by 14 runs on the Duckworth/Lewis system at the World Twenty20 tournament.

The 32-year-old Jayawardene slammed 10 fours and four sixes to dominate Sri Lanka’s innings of 173-7 off 20 overs.

Zimbabwe’s chase never got momentum as it was twice halted by rain, and ended limply with them 29-1 off five overs—well behind on the Duckworth/Lewis system.

Showers stopped the Africans at 4-0 off one over and, on resumption, they were set a revised target of 104 off 11 overs.

They failed to hit a single boundary going after a further 100 runs off 10 overs.

Rain returned to cut them short just after the final ball of the fifth over — the minimum needed to constitute a match.

Earlier, Sri Lanka got a flying start from Jayawardene after winning the toss. The silky right-hander became the fourth batsman to register an international Twenty20 century and the second in this tournament following India’s Suresh Raina against South Africa on Sunday.

He struck pacer Chris Mpofu for two fours and a six in the opening over.

Sri Lanka, needing to win to avoid going out the tournament, raced to 59-1 off the first six overs.

Jayawardene, whose only chance was a close run out chance to Charles Coventry when he was 35, passed his second successive fifty of the competition off 27 deliveries.

No Zimbabwe bowler escaped punishment and the Sri Lankans lashed 11 fours and nine sixes during the innings.

Zimbabwe needs to beat New Zealand in its final Group B match on Tuesday to have any chance of advancing to the Super Eights.