Bangladesh get away with slap on the wrist 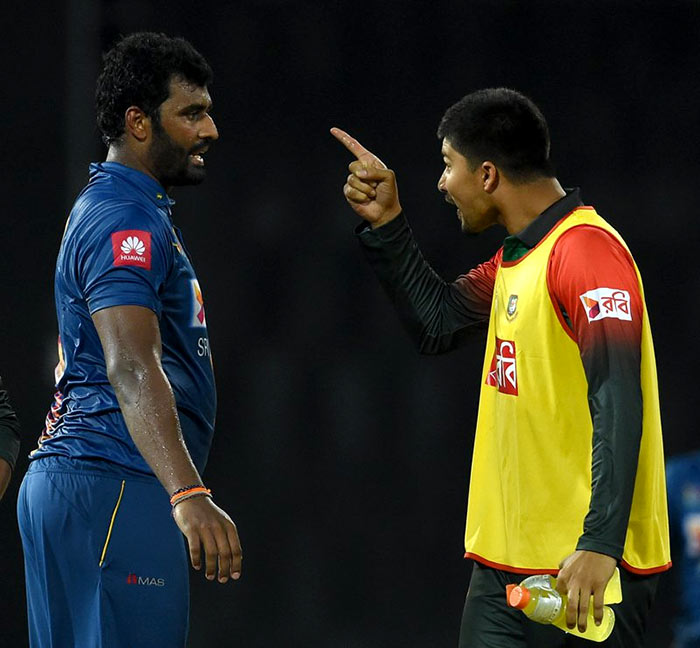 The shameful behaviour of Bangladesh players during the closely contested last group game of the Nidahas Trophy tournament match at RPS on Friday hasn’t been met with condemnation it deserved as both captain Shakib Al Hasan and reserve player Nurul Hasan have got away with a slap on the wrist having been handed 25 percent fines.

South African fast bowler Kagiso Rabada, who has been handed a two match suspension that ruled him out of the remainder of the Test series against Australia, must be wondering where is the consistency when the ICC penalizes players.

Chris Broad, the Match Referee in Colombo should have done more as the whole world saw Shakib’s antics. Until Friday’s game, the tournament had progressed smoothly without any incident. With the arrival of the incorrigible Shakib all hell has broken loose.

Broad investigated the breaking of the door at the visitors’ dressing room at RPS as well after a complaint had been lodged by the ground officials. Broad instructed ground staff to provide him with CCTV footage to sanction the culprit, but cameras do not penetrate into the dressing room. A couple of dressing room attendants had seen a senior Bangladeshi player forcefully pushing the door but a third party evidence was not sufficient to charge the player.

The umpires witnessed the footage of the on field incidents yesterday morning and although they could have pressed charges for breach of conduct, they opted to soften their stance as the initial mistake was made by them.

Bangladesh required 12 runs off the last over. The first ball by Isuru Udana was a bouncer to Mustafizur Rahman and the Sri Lankans appealed for caught behind. Umpire Ravindra Wimalasiri turned down the appeal, but Thisara Perera opted to review. Amidst the chaos, the umpire failed to signal ‘one for the over’. As per ICC rules, only one bouncer is allowed in an over. As the umpire had not signaled ‘one for the over’, Udana followed it up with another bouncer. Mustafizur didn’t make contact and attempted to steal a single and in the process was run out at the non-striker’s end. Leg-umpire Ruchira Palliyaguruge had signaled a no ball, but later after consulting with his colleague overturned the decision and then there was mayhem.

Mahmudullah Riyad reacted angrily but the actions of Shakib beyond the boundary was a disgrace to watch.

A couple of Sri Lankans didn’t cover themselves in glory either with Kusal Mendis and reserve fielder Dhananjaya de Silva getting involved in altercations.

Sri Lanka started off the Nidahas Trophy campaign brilliantly with a win over India. But nothing went right for them from thereon. Sri Lanka’s batting looked in superb nick in the second game. They set Bangladesh a target of 215. It was a match winning score as the highest successful run chase in Sri Lanka was 178. But Bangladesh rewrote the record books chasing down the target. There was a further blow as captain Dinesh Chandimal was suspended for two games due to slow over rate offense and he took no further part in the competition.

From thereon, Sri Lanka panicked taking desperate measures. They beefed up bowling thinking that it was their weak link but that thinned the batting further. Sri Lanka’s top order comprised – Danushka Gunathilaka, Kusal Mendis, Kusal Perera and Upul Tharanga. Of the four batters, they could rely only on three as Gunathilaka is loose cannon. Then on top of it, they were batting Dasun Shanaka at number five and Jeevan Mendis at number six. That was simply recipe for disaster.

Mendis had last played for Sri Lanka in 2015 and there’s no clarity for what purposes he was brought back to the side three years later. And during the must win clash on Friday, he cut a sorry figure batting at number six. Mendis was all at sea and was dismissed for three after 11 deliveries.

In today’s edition of Sunday Island, India’s Head Coach Ravi Shastri says that they used to look up to Sri Lanka for raising fielding standards. Sri Lanka’s fielding standards have gone down drastically in the last five years. People have a bone to pick with us when we call Sri Lanka the worst fielding side in the world. So we will put it gently this time by saying that the two best fielding sides in the competition reached the finals of the Nidahas Trophy.

Home » Bangladesh get away with slap on the wrist