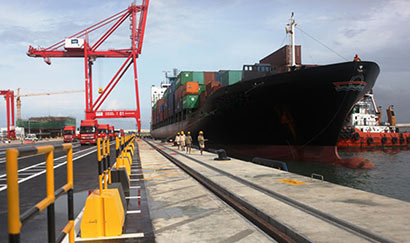 Dec 3 (Reuters) – Bangladesh signed a pact on Wednesday to export 50,000 tonnes of rice to Sri Lanka at $450 a tonne in a first government-to-government deal, a senior food ministry official said.

Strong output and good reserves have prompted the Bangladesh government to initiate the plan to export rice. Bangladesh exports a small quantity of aromatic rice, but this deal would be its first export of non-fragrant coarse rice.

The price of rice has shot up in Sri Lanka after production dropped due to an 11-month drought, which experts consider to be the worst in its recent history.

The price included freight and insurance and the shipment of the parboiled rice would be within 60 days, the ministry official said.

The world’s fourth-biggest rice producer, Bangladesh consumes almost all its production to feed its population of 160 million. It often needs to import rice to cope with shortages caused by natural calamities such as floods or droughts.

Although it did not import rice during the last two years, Bangladesh was ranked as the fourth-largest importer of the grain by the U.S. Department of Agriculture in 2011, with a volume of 1.48 million tonnes.

But prices soared in January 2013, and the government backed away from scrapping the export ban.

Sri Lanka’s Finance Ministry reduced taxes on rice imports in April and on pulses in July to help mitigate the effects of this year’s drought on the market.