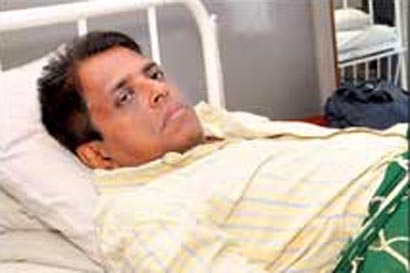 The Kollupitiya Police say that the senior lawyer suspected of assaulting Lakbimanews Chief Editor and well-known journalist Rajpal Abeynayake, is yet to report to the Police, for the purpose of attending an inquiry.

According to the Police, the suspect will be given another date to report to the Police for facilitating the inquiry. Abeynayake had allegedly been assaulted by the senior lawyer last Saturday at the annual Voetlights dinner, held at a Kollupitiya hotel, attended by lawyers.

Abeynayake is currently receiving treatment at the Colombo National Hospital as a result of the attack. Kollupitiya Police are conducting further inquiries into the incident.

They said that the Bar Association of Sri Lanka (BASL) should take prompt action against this type of incident, which leads to the violation of the right to free expression and creates disunity among the legal fraternity.

According to senior lawyer Gomin Dayasiri, the function where the incident took place has an ancient history where lawyers spoke freely without malice and repercussion.

He opined that the fallacy is not with the assailant but those who encouraged him to such unbecoming conduct. Dayasiri said that it may be the reason why many lawyers now boycott the event which is a new culture.

“It is really a gathering of elite lawyers of Hulftsdorp and any affront is treated as a joke. Therefore, it is incredible that fists should be shown where scorn which is the order of the day, is freely traded.”

He said that it is a case of too much going into the head where, sometimes caution is thrown to the wind.

The attorney said that it is a matter which can be sorted out with an unconditional apology which can be accepted knowing that it happened without any bad intention under the influence of the festive occasion.

“It should have been settled out on the floor of the house before the night was out,” he said.

Senior lawyer Upali Senaratne commenting on the attack, said the Bar Association of Sri Lanka should take stern action to avert this type of unfortunate incident in the future.

“It is very unfortunate that respected senior lawyer Rajpal Abeynayake was assaulted at a dinner.

This type of behaviour must be condemned and treated with contempt,” he added.

He was of the view that the Supreme Court and the BASL should take prompt action to avert this kind of incident in the future.

Senaratne said that there is a way to behave at a gathering of this nature even though the suspect lawyer was under the influence of liquor.

They voiced their anger over this unbecoming conduct of a lawyer. Fisheries and Aquatic Resources Development Minister Dr. Rajitha Senaratne yesterday condemned the attack on the Chief Editor.

Minister Dr. Senaratne said that Abeynayake was subjected to an inhumane assault due to his frank and forthright views.

The minister expressed these sentiments after visiting Abeynayake who is receiving treatment at the Colombo National Hospital.

“Rajpal told me that there was no one who came to his defence when he was being attacked,” he said.

Minister Senaratne said that the present lawyers do not have proper understanding of the role that they are destined to play in society.

“According to the Editor there were a number of Supreme Court lawyers at the hotel who are continuously talking about human rights and no one bothered, to prevent the attack, he said.

Minister of Plantation Industries and special envoy of the President on Human Rights Mahinda Samarasinghe yesterday deplored the assault on the Lakbima Editor and senior journalist Rajpal Abeynayake.

The minister went on to say that the Editor had been a journalist for a long time and has earned a good name in the trade both at home and internationally. This kind of story will be picked up internationally he said.

The minister said he sincerely hoped the law enforcement authorities will do all they can to ensure that a comprehensive investigation will be carried out into the incident. The culprits must be dealt with in accordance with the law.

2 Responses to BASL urged to act on Abeynayake assault: Suspect fails to turn-up for Police inquiry